(PO-100) Hashimoto’s Encephalopathy: A Case series and its Impact on Psychiatric Illness 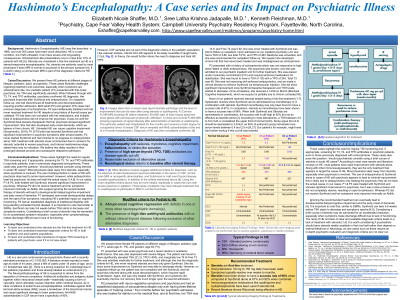 Background: Hashimoto’s Encephalopathy (HE) was first described in 1966, and over 200 cases have been since described. HE is a rare condition, but if left untreated, it can have severe and long-lasting consequences. Schizophrenic-like presentations occur in less than 10% of patients with HE [5]. Steroids are considered a first-line treatment as HE is a steroid-responsive encephalopathy. Yet, steroids are seldomly used by most physicians if brain MRI is normal or psychosis is the primary symptom [4]. It is worth noting; a normal brain MRI is part of the diagnostic criteria for HE [Table 1.]
Cases/

Discussion: We present three HE patients at different stages of lifespan; pediatric, adult, and geriatric. These cases illustrate challenges regarding treatment and outcomes, especially when symptoms are schizophrenic-like. Our pediatric patient (P1) presented with first-onset psychosis; her TSH was significantly elevated. When followed through with T3, T4, and TPO antibodies, psychiatry confirmed HE diagnosis. Her psychosis improved after Synthroid and antipsychotics. On outpatient follow-up, she had discontinued all treatments and decompensated, requiring another admission. Both adult (P2) and geriatric (P3) cases had previous diagnoses of schizophrenia. P2 was intellectually disabled and had never received treatment for HE despite a long history of thyroid issues per collateral. P3 had been non-compliant with her medications, and multiple trials of antipsychotics did not improve her psychosis. It was not until her Synthroid dose became therapeutic that her psychosis showed significant improvement. She had also developed early-onset dementia, which we believe is from chronic HE. Untreated HE can cause cognitive impairment (Savarimuthu, 2019). P1 & P3 both had received Synthroid and had significant improvement in psychotic symptoms after several weeks. P2 never started Synthroid and had minimal to no progress on antipsychotics alone. Still, treatment with steroids never commenced due to concerns for steroids’ potential to worsen psychosis, and Internal medicine/neurology stated there was no indication. We believe this delay resulted in their prolonged disease process and subsequent relapse/re-admission.
Conclusion/Implications: These cases highlight the need for regular TSH screening and, if appropriate, screening for T3, T4, and TPO antibodies in psychotic patients, even in previously diagnosed schizophrenia. These cases also pose the question: ‘should psychiatrists consider using steroids in acute HE cases?’ Most physicians steer away from steroids, especially when psychosis is involved. The use of antipsychotics in cases of HE with psychosis does lead to some improvement. However, while antipsychotics treat the psychosis, its does not treat the actual cause [1,4,6]. In our cases, P1 & P3, both treated with Synthroid, showed significant improvement in psychosis. Whereas P2 did not receive treatment and her symptoms improved minimally on Abilify. We suspect ignoring the recommended therapy of steroids will lead to developmental delays/cognitive impairment and early onset of dementia. P1 developed new-onset developmental delays with the start of her symptoms, indicating HE’s potential impact on cognitive functioning. P2 had an established diagnosis of intellectual disability with long-standing untreated thyroid disease. It is important to note that similar to SSRIs, Synthroid can take 3-6 weeks before TSH starts to decrease and symptoms resolve. Considering a brief course of steroids may be warranted for an accelerated symptom resolution, especially when symptomatology makes discharge difficult due to lack of functioning.