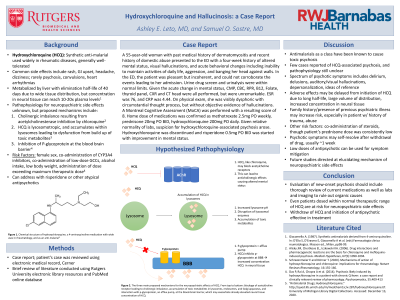 Background/Significance:
Although hydroxychloroquine (HCQ) is generally well-tolerated, there are a few cases of severe neuropsychiatric side effects reported in the literature including psychosis, affect lability, aggressive behavior, and convulsions. HCQ has a large volume of distribution, and some studies indicate that its steady-state concentration in neural tissue may be 10-20x higher than in serum (Ali and Jones 2018).

Case: A 55-year-old woman with past medical history of dermatomyositis and recent history of domestic abuse presented to the ED with a four-week history of altered mental status, visual hallucinations, and acute behavioral changes including inability to maintain activities of daily life, aggression, and banging her head against walls. On presentation, the patient was pleasant but incoherent, and could not corroborate the events leading to admission. Urine drug screen and urinalysis were within normal limits. Given the acute change in mental status, CMP, CBC, RPR, B12, Folate, TFTs, CXR and CT head were all performed, and were unremarkable. ESR was 76, and CRP was 4.44. On physical exam, she was visibly dysphoric with circumstantial thought process, but without objective evidence of hallucinations. A Montreal Cognitive Assessment (MoCA) was performed with a resulting score of 8. Home dose of medications was confirmed as methotrexate 2.5mg PO weekly, prednisone 20mg PO BID, hydroxychloroquine 200mg PO daily. Given relative normality of labs, suspicion for hydroxychloroquine-associated psychosis arose. Hydroxychloroquine was discontinued and risperidone 0.5mg PO BID was started with improvement in mental status.


Discussion:
Antimalarials as a class have been shown to cause toxic psychosis. There are three main posited mechanisms for the neuropsychiatric side effects of HCQ: cholinergic imbalance from chloroquine-mediated inhibition of acetylcholinesterase, accumulation of HCQ within lysosomes leading to buildup of toxic metabolites, and the inhibition of P-glycoprotein at the blood brain barrier (Alisky, Chertkova, and Iczkowski 2006). Additionally, risk factors such as history of trauma and co-administration of steroids may predispose patients to more severe neuropsychiatric side effects. Low dose antipsychotics and withdrawal of HCQ safely results in resolution of these symptoms.

Conclusions/Implications:
Evaluation of new-onset psychosis should include thorough review of medications, labs, and imaging to rule out organic causes. Even patients dosed within therapeutic range of HCQ are at risk for neuropsychiatric effects. Withdrawal of HCQ and initiation of antipsychotic medication is effective in mitigating these adverse effects, and future studies should be directed at examining the underlying pathophysiology of these effects.