(PO-105) Improvement in Visual Hallucinations with Rivastigmine in Dementia with Lewy Bodies: Case Report and Review of Literature 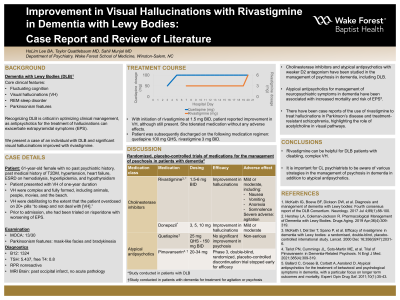 Background: Dementia with Lewy bodies (DLB) can present with a variety of clinical features, including cognitive changes, visual hallucinations (VH), and parkinsonism features. Recognizing DLB is critical in optimizing clinical management, as antipsychotics for the treatment of hallucinations can exacerbate extrapyramidal symptoms (EPS). We present a case of an individual with DLB and significant VH improved with rivastigmine and conduct a review of literature.

Case: 61-year-old female with no past psychiatric history, past medical history of T2DM, hypertension, heart failure, ESRD on hemodialysis, hyperlipidemia, and hypothyroidism, presented to our hospital with VH ongoing for months in addition to memory loss. VH were complex and fully formed including animals, movies and the beach, which were very disabling for her. On evaluation, she had cognitive impairment with MOCA-13/30. On examination, she had parkinsonism features including mask-like facies and bradykinetic movements. Prior to our hospital admission, she had been trialed on risperidone, which worsened EPS. On day 3 of hospitalization, quetiapine was initiated at 50 mg and subsequent titrated to a dose of 100 mg with minimal improvement. On day 7, rivastigmine was added at 1.5mg BID with marked reduction in VH over a period of 8 days. At the time of discharge, she reported subjective improvement in VH with no worsening of EPS and was discharged with 100 mg quetiapine and 3 mg BID rivastigmine.

Discussion: Cholinesterase inhibitors and atypical antipsychotics with weaker D2 antagonism have been studied in the management of psychosis in DLB. Clinicians are much more familiar with the use of quetiapine in this population, however, its association with a clinically significant improvement in psychosis in DLB is unclear (McKeith et al 2017). Rivastigmine has been shown to reduce hallucinations and neuropsychiatric inventory subscores by at least 30% in patients with DLB (McKeith 2000), which was helpful for our patient. DLB consortium recommends a combination of pharmacologic and nonpharmacologic therapies for the management of DLB, but more research is necessary to develop an evidence-based DLB management (Hershey et al 2019).

Conclusion: Rivastigmine can be helpful for DLB patients with disabling complex VH. It is important for CL psychiatrists to be aware of various management strategies in addition to atypical antipsychotics.