(PO-106) Is it time to revisit neuroinflammatory depression? A case of COVID-19 associated depression and the role of ECT 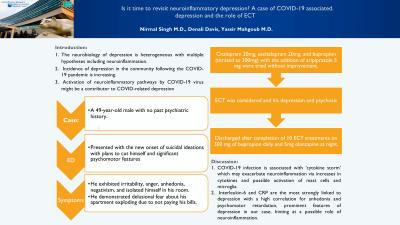 Background: The neurobiology of depression can be heterogeneous with multiple hypotheses proposed, including serotonin and neuroinflammatory pathways, each falling short of explaining the complete picture. Several reports describe the increased frequency of depression in the community following the COVID-19 pandemic and reports about neuropsychiatric sequela of the virus are emerging and the possible role of neuroinflammation. We present a patient who developed severe depression with psychotic features subsequent to his COVID-19 infection and was treated successfully with ECT following several failed medication trials.

Case: A 49-year-old male with a past medical history of type II diabetes, hyperlipidemia, hypertension, chronic kidney disease, and gastroesophageal reflux disease was diagnosed with COVID-19 in January 2021. Upon initial diagnosis, neither admission nor treatment with steroids was required. He presented to the emergency department four days later with sepsis, pneumonia, and AKI secondary to COVID-19 along with the new onset of suicidal ideations with plans to cut himself and significant psychomotor features despite no previous history of mental illness or treatment. His EEG showed diffuse slow waves, consistent with encephalopathy, but no delirium was noted. He exhibited irritability, anger, anhedonia, negativism, and isolated himself in his room. He demonstrated delusional fear about his apartment exploding due to electricity disconnected for not paying his bills. He misinterpreted the blood draws as someone suspecting he has HIV. Treatment started on the medical floor and he was later transferred to the psychiatric floor. Several psychotropic medications were tried separately including citalopram 20mg, escitalopram 20mg, and bupropion (titrated to 300mg) with the addition of aripiprazole 5 mg without improvement. ECT was considered and his depression and psychosis improved following 6 treatments of bilateral ECT. He was discharged following completion of 10 ECT treatments on 300 mg of bupropion daily and 5mg olanzapine at night.

Discussion: Viral infections such as HIV, Hepatitis C, and Influenza are associated with neuropsychiatric sequelae, including depression. COVID-19 infection is occasionally associated with ‘cytokine storm’ which may exacerbate neuroinflammation via increases in cytokines and possible activation of mast cells and microglia.[1] The role of elevated pro-inflammatory cytokines and glucocorticoid receptor resistance is widely studied. Interleukin-6 and CRP are the most strongly linked to depression with a high correlation for anhedonia and psychomotor retardation, prominent features of depression in our case, hinting at a possible role of neuroinflammation. [2] Psychotic features and psychomotor retardation are predictors of ECT response which matched the response to ECT in this case.