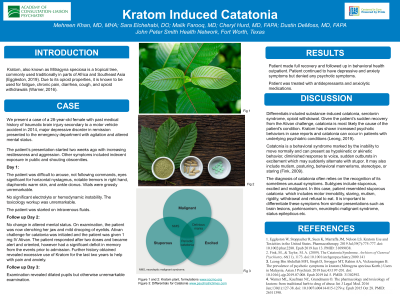 Background: Kratom, also known as Mitragyna speciosa is a tropical tree, commonly used traditionally in parts of Africa and Southeast Asia (Eggleston, 2019). Due to its opioid properties, it is known to be used for fatigue, chronic pain, diarrhea, cough, and opioid withdrawals (Warner, 2016).


Case: We present a case of a 28-year-old female with past medical history of traumatic brain injury secondary to a motor vehicle accident in 2014, major depressive disorder in remission presented to the emergency department with agitation and altered mental status. The patient’s presentation started two weeks ago with increasing restlessness and aggression. Other symptoms included indecent exposure in public and shouting obscenities. On examination, the patient was difficult to arouse, not following commands, eyes significant for horizontal nystagmus, notable tremors in right hand, diaphoretic warm skin, and ankle clonus. Vitals were grossly unremarkable. Laboratory workup showed no significant electrolyte or hemodynamic instability. The toxicology workup was unremarkable. The patient was started on intravenous fluids. Day 2 revealed no change in altered mental status. On examination, the patient was now clenching her jaw and mild drooping of eyelids. Ativan challenge for catatonia was initiated and the patient was given 1 mg IV Ativan. The patient responded after two doses and became alert and oriented, however had a significant deficit in memory from the events prior to admission. Further history obtained revealed excessive use of Kratom for the last two years to help with pain and anxiety. Day 3 examination revealed dilated pupils but otherwise unremarkable examination.

Differentials included substance-induced catatonia, serotonin syndrome, opioid withdrawal. Given the patient’s sudden recovery from the Ativan challenge, catatonia is most likely the cause of the patient's condition. Kratom has shown increased psychotic behaviors in case reports and catatonia can occur in patients with underlying psychiatric conditions (Leong, 2019). Catatonia is a behavioral syndrome marked by the inability to move normally and can present as hypokinetic or akinetic behavior, diminished response to voice, sudden outbursts in excitement which may suddenly alternate with stupor. It may also include mutism, posturing, behavioral mannerisms, stereotype, or staring (Fink, 2009).