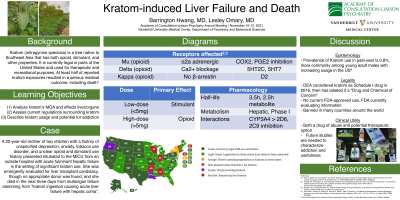 Kratom (mitragynine speciosa) is a tree native to Southeast Asia that has both opioid, stimulant, and other unknown properties. It is currently legal in the United States and used for therapeutic and recreational purposes. There is a dearth of literature on kratom’s effects on the body. At least half of reported kratom exposures resulted in a serious medical outcome, including death (1). In contrast, there are no controlled clinical trials on safety and efficacy of kratom as a treatment (2).

Given lack of published information on kratom, the team emergently listed the patient for liver transplant despite significant concern for kratom use disorder. Over the course of three days, the patient’s mental status and labs continued to worsen, ultimately resulting in death. Interventions pursued included dialysis, mechanical ventilation, intracranial pressure monitoring with pressure optimization, anticonvulsant therapy, antibiotic therapy, N-acetylcysteine, and other routine MICU care. Due to relatively unremarkable health before ingestion, lack of other significant events, and severe rapid decline, multidisciplinary team consensus cause of death was due to kratom ingestion causing “acute liver failure with hepatic coma”.

This case report will go into further detail on kratom by analyzing kratom’s mechanism of action, therapeutic use, known side effects including addictive potential, effects on the liver including acute fulminant injury, and current laws and regulations surrounding kratom in the United States with relevance to public health. This is relevant to psychiatrists in the general consult, transplant, and addictions services.