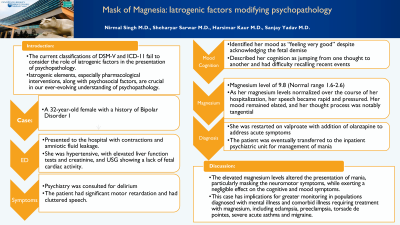 Introduction: The current classifications of DSM-V and ICD-11 fail to consider the role of iatrogenic factors in the presentation of psychopathology. Clinicians need to be aware of the drug effects on the symptoms of a disorder in medicated patients. Iatrogenic elements, especially pharmacological interventions, along with psychosocial factors, are crucial in our ever-evolving understanding of psychopathology. We present a case of Magnesium modifying the presentation of a manic episode.

Case: A 32-year-old female with a history of Bipolar Disorder I, G5P3 presented to the hospital with contractions and amniotic fluid leakage. Patient was hypertensive, with elevated liver function tests and creatinine, and USG showing a lack of fetal cardiac activity. She was started on labetalol and magnesium for severe preeclampsia. After the delivery of a stillborn fetus, the primary team noticed that she was dysarthric, confused, and unable to sleep. Neurology was consulted for acute encephalopathy; imaging revealed no acute changes. Subsequently, psychiatry was consulted for delirium. The patient demonstrated significant motor retardation and had cluttered speech. She identified her mood as “feeling very good” despite acknowledging the fetal demise. She described her cognition as jumping from one thought to another and had difficulty recalling recent events. On the following day, blood workup showed a magnesium level of 9.8 (Normal range 1.6-2.6). As her magnesium levels normalized over the course of her hospitalization, her speech became rapid and pressured. Her mood remained elated, and her thought process was notably tangential. Use of instruments improved along with fine and gross movements. She was restarted on valproate, which she had stopped after conception, with addition of olanzapine to address acute symptoms. The patient was eventually transferred to the inpatient psychiatric unit for management of mania. Her magnesium level was 3.7 at discharge.

Discussion: Magnesium supplementation as treatment of mania in poor responders to atypical antipsychotics and mood stabilizers has been suggested in a prior study (Heiden, 1999). With our case, the elevated magnesium levels altered the presentation of mania, particularly masking the neuromotor symptoms, while exerting a negligible effect on the cognitive and mood symptoms. The most common symptoms of hypermagnesemia include weakness, drowsiness, confusion, reduced reflexes, hypotension and arrythmia.This case has implications for greater monitoring in populations diagnosed with mental illness and comorbid illness requiring treatment with magnesium, including eclampsia, preeclampsia, torsade de pointes, severe acute asthma and migraine (Geurrera, 2009).