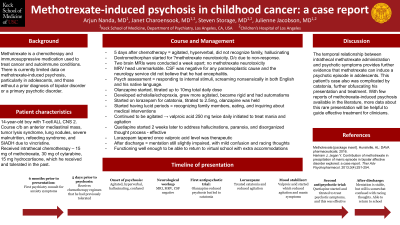 Background: Methotrexate is a chemotherapy and immunosuppressive medication used to treat cancer and autoimmune conditions (DAVA pharmaceuticals 2016). There is currently limited data on methotrexate-induced psychosis, particularly in adolescents, and those without a prior diagnosis of bipolar disorder or a primary psychotic disorder (Hariram 2013).

Case: 14-year-old boy with T-cell ALL CNS 2 whose course has been complicated by an anterior mediastinal mass, tumor lysis syndrome, lung nodules, severe malnutrition, refeeding syndrome, and SIADH due to vincristine. He had been seen by the CL psychiatry service during his previous hospitalizations for his anxiety. In his current hospitalization, he received intrathecal chemotherapy – 15 mg of methotrexate, 30 mg of cytarabine, and 15 mg hydrocortisone, which he received and tolerated in the past. Five days after administration, he became agitated and hyperverbal, did not recognize his family, and was possibly hallucinating. Dextromethorphan was started for presumptive methotrexate neurotoxicity, but this was discontinued due to non-response. Two brain MRIs were conducted a week apart; neither were concerning for methotrexate neurotoxicity. MRV head was also unremarkable. CSF was negative for any paraneoplastic cause and the neurology service did not believe that he had encephalitis. On assessment by the psychiatry team, he was responding to internal stimuli, screaming nonsensically in both English and his native language. Olanzapine was started and titrated up to 10mg total daily dose. On this dosage, he developed echolalia/echopraxia, grew more agitated, became rigid and had automatisms. Due to concerns of catatonia, he was started on lorazepam, which reduced his agitation, and olanzapine was held. Lorazepam was titrated to 2.5mg total daily dose, with as needed doses available. While he demonstrated ongoing psychotic process, he had lucid periods highlighted by recognizing family members, eating, and inquiring about medical interventions. His agitation persisted, so valproic acid 250 mg twice daily was initiated to treat mania and agitation. Quetiapine was started a few weeks later to address hallucinations, paranoia, and disorganized thought process, which was effective in treating his psychotic symptoms. Lorazepam was gradually tapered once valproic acid level was therapeutic. After discharge, the patient's mentation remained stable but still somewhat impaired, with racing thoughts and confusion. However, he was functioning well enough to be able to return to virtual school with extra accomodations.

Discussion: The temporal relationship between intrathecal methotrexate administration and psychotic symptoms provides further evidence that methotrexate can induce a psychotic episode in adolescents. This patient's case also was complicated by catatonia, further obfuscating his presentation and treatment. With few reports of methotrexate-induced psychosis available in the literature, more data about this rare presentation will be helpful to guide effective treatment for clinicians.

Conclusion: Intrathecal methotrexate can precipitate a psychotic episode in an adolescent without a prior psychosis history, and effective treatment may be achieved through a combination of antipsychotics, benzodiazepines, and a mood stabilizer.