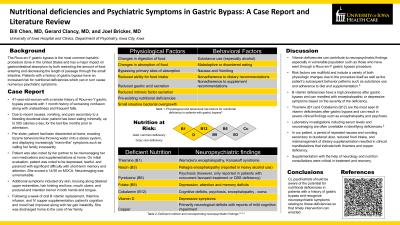 The Roux-en-Y gastric bypass is the most common bariatric procedure done in the United States and has a major impact in gastrointestinal absorption by both restricting the amount of food entering and decreasing the length of passage through the small intestine. Patients with a history of gastric bypass have an increased risk for nutritional deficiencies which can in turn cause numerous neuropsychiatric symptoms. We present a case in which a patient with a history of gastric bypass presented with bizarre behavior, depressed mood, and disorientation after a period of poor dietary intake and inadequate supplementation.

Ms. X is a 41-year-old woman with a remote history of Roux-en-Y gastric bypass presents with 1 month history of worsening confusion along with unsteadiness and frequent falls. Due to recent nausea, vomiting, and pain secondary to a bleeding duodenal ulcer, patient has been eating minimally, up to 500 calories a day, for the last few months prior to admission. Per her sister, patient had been disoriented at home, enacting bizarre behaviors like throwing water onto a stereo system, and displaying increasingly “manic-like” symptoms such as calling her family incessantly. Patient was also noted by her partner to be mismanaging her own medications and supplementations at home. On initial evaluation, patient was noted to be depressed, tearful, and paranoid with significant difficulty with short-term memory and attention. She scored a 14/30 on MOCA. Neuroimaging was unremarkable. Additional symptoms included dry skin, bruising along bilateral upper extremities, hair kinking and loss, mouth ulcers, and postural and intention tremor in both hands and tongue. Following a week of oral B vitamin replacement, thiamine infusion, and IV copper supplementation, patient’s cognition and mood had improved along with her gait instability. She was discharged home to the care of her family.

Vitamin deficiencies can contribute to neuropsychiatric findings especially in vulnerable population such as those who have went through a Roux-en-Y gastric bypass procedure. Risk factors are multifold and include a variety of both physiologic changes due to the procedure itself as well as the patient’s subsequent behavior patterns such as substance use and adherence to diet and supplementation (Saltzman 2013). B vitamin deficiencies have a high prevalence after gastric bypass and can manifest with encephalopathic or depressive symptoms based on the severity of the deficiency (Kumar 2014). In our patient, repeated nausea and vomiting, reduced food intake, and mismanagement of dietary supplementation resulted in a severe B vitamin and copper deficiency. This case highlights the importance of evaluating for risk factors and nutritional status in a patient with gastric bypass presenting with neuropsychiatric symptoms.

CL psychiatrists should be aware of the potential for nutritional deficiencies in patients with a history of gastric bypass and recognize neuropsychiatric symptoms relating to these deficiencies so that timely intervention can enacted.