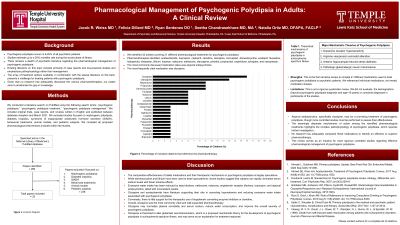 Psychogenic polydipsia occurs in 6-20% of all psychiatric patients and causes significant morbidity and mortality (Dundas et al., 2007). Despite this, there remains a dearth of psychiatric literature regarding its pharmacological management, which our paper aims to ameliorate.

To our knowledge, we are the first to identify 22 proposed pharmacological treatments for psychogenic polydipsia in a single review. The mechanistic theories of psychogenic polydipsia include, but are not limited to, dopamine receptor hypersensitivity, vasopressin osmostat alteration, and anterior hippocampal-induced stress diathesis (Ahmadi & Goldman, 2020). Current literature consists mostly of case reports and low-powered studies, without much emphasis on pharmacologic management. Therefore, the effectiveness of trialed medications and their therapeutic mechanisms is largely speculative. Serum sodium levels have been normalized using demeclocycline, lithium, and vaptans. Excessive water intake has been reduced by beta blockers, naltrexone, naloxone, angiotensin receptor blockers, bupropion, and atypical antipsychotics, albeit with inconsistent results (Dundas et al., 2007; Ahmadi & Goldman, 2020; Sailer et al., 2017). Clozapine and acetazolamide have literature supporting their role in correcting hyponatremia and water seeking behaviors associated with psychogenic polydipsia (Ahmadi & Goldman, 2020). Conversely, angiotensin converting enzyme inhibitors and clonidine have little support for therapeutic use (Dundas et al., 2007).

Notable heterogeneity among the mechanisms for these medications highlights the complex pathophysiology of psychogenic polydipsia, which has yet to be elucidated. Furthermore, no research has adequately compared these medications or identified a superior pharmacotherapy. This review is an impetus for more rigorous controlled studies regarding the pathophysiology and most effective management of psychogenic polydipsia.