(PO-123) Prolonged Anticholinergic Psychosis as a Result of Diphenhydramine Abuse: A Case Report 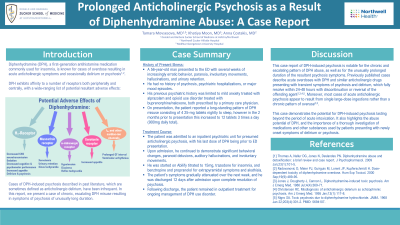 Diphenhydramine (DPH), an antihistamine medication commonly used for insomnia, is known for cases of overdose resulting in acute anticholinergic symptoms and occasionally delirium or psychosis1,2. We present a case of chronic, escalating DPH misuse resulting in symptoms of psychosis of unusually long duration.

A 56-year-old man presented to the ED with several weeks of increasingly erratic behavior, paranoia, involuntary movements, hallucinations, and urinary retention. He had no history of psychosis, psychiatric hospitalizations, or major mood episodes. His previous psychiatric history was limited to mild anxiety treated with alprazolam and opioid use disorder treated with buprenorphine/naloxone, both prescribed by a primary care physician. On presentation, the patient reported a long-standing pattern of DPH misuse consisting of 4 25-mg tablets nightly to sleep, however in the 2 months prior to presentation this increased to 12 tablets 3 times a day (900mg daily total). The patient was admitted to an inpatient psychiatric unit for presumed anticholinergic psychosis, with his last dose of DPH being prior to ED presentation. Upon admission, he continued to demonstrate significant behavioral changes, paranoid delusions, auditory hallucinations, and involuntary movements. He was started on Abilify titrated to 15mg, trazodone for insomnia, and benztropine and propranolol for extrapyramidal symptoms and akathisia. The patient’s symptoms gradually attenuated over the next week, and he was discharged 12 days after admission upon complete resolution of psychosis. Following discharge, the patient remained in outpatient treatment for ongoing management of DPH use disorder.

This case report of DPH-induced psychosis is notable for the chronic and escalating pattern of DPH abuse, as well as for the unusually prolonged duration of the resultant psychosis symptoms. Previously published cases describe acute overdoses with DPH and similar anticholinergic drugs presenting with transient symptoms of psychosis and delirium, which fully resolve within 24-48 hours with discontinuation or reversal of the offending agent3,4. Moreover, most cases of acute anticholinergic psychosis appear to result from single large-dose ingestions rather than a chronic pattern of overuse2,3.

This case demonstrates the potential for DPH-induced psychosis lasting beyond the period of acute intoxication. It also highlights the abuse potential of DPH, and the importance of a thorough investigation of medications and other substances used by patients presenting with newly onset symptoms of delirium or psychosis.