(PO-125) Psychogenic Polydipsia: Look and You Will Find It 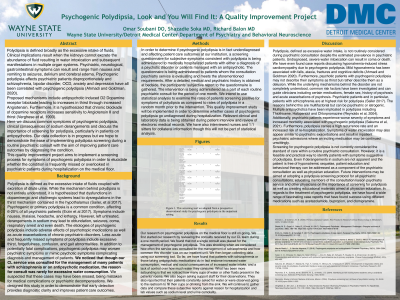 Polydipsia is characterized by excessive fluid intake coupled with dilute urine excretion. While the mechanism behind polydipsia is not entirely understood, dopaminergic and cholinergic system dysfunction leads to disregulation of the thirst center of the hypothalamus. Psychogenic polydipsia is a common condition, affecting 6-20% of all psychiatric patients. Symptoms include nausea, malaise, headache, and lethargy. It can also present as forgetfulness and confusion. In a patient with a psychotic illness, it can mimic symptoms of acute decompensation. If left untreated, it can lead to obtundation, seizures, coma, respiratory arrest, and death. It has a high recurrence rate with an increased risk of re-hospitalization. The etiologies of psychogenic polydipsia include adverse effects of psychotropic medications or as a an acute exacerbation of the chronic psychiatric disorder.

Given the lack of routine screening and the burden of psychotic disorders in our urban population, we surmise that many cases of polydipsia are missed. This quality improvement project aims to implement a screening process for symptoms of psychogenic polydipsia in order to elucidate whether the condition is missed or overlooked in psychiatric patients during hospitalization on the medical floor. The early detection and treatment of psychogenic polydipsia would not only provide diagnostic clarity, but also improve patient care outcomes.

The questionnaire will be administered to patients whom the consultation psychiatry service is evaluating who must either have a diagnosis of a psychotic disorder or patients managed with an antipsychotic. A detailed medical and psychiatric history will be recorded at bedside along with the participants subjective report on the questionnaire. The intervention will be administered as a part of each routine psychiatric consult for the period of one month. The study will then use statistical analysis to examine the rates of patients screening positive for symptoms of polydipsia. Relevant clinical and laboratory data will be obtained through patient interview and review of electronic medical records.

Our project is still ongoing and final outcomes have not been reached at this time. Future interventions may be aimed at adopting a polydipsia screening protocol for all psychiatric consultations, educating members of the consultation liaison psychiatry service and other physicians on the importance of screening for polydipsia, and creating educational materials aimed at physician education.