(PO-130) Serotonergic Toxidrome Following Methylene Blue Administration for Vasoplegia in A Patient on Multiple Serotonergic Medications: The Role of the Proactive Consult-Liaison Psychiatrist in Prevention 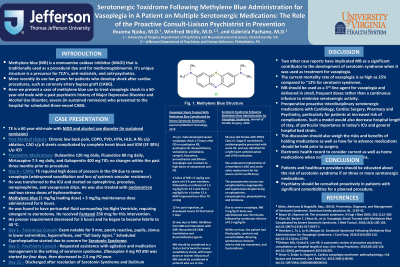 Background: In cardiothoracic surgeries, there is an increased risk of vasoplegia, characterized by widespread vasodilation and hypotension1. In these emergencies, methylene blue (MB), a potent MAOI, may be used to increase cardiovascular tone2. Many antidepressants have half-lives of several weeks and continue to have effects even if not given before surgery.

Case: Mr. E is a 60-year-old male with a psychiatric history of MDD, alcohol use disorder (in remission), and polysubstance use (in remission). His medical history includes COPD, HLD, Atrial fibrillation s/p ablation, CAD, and Ischemic Cardiomyopathy (EF 30%). His surgical history is notable for eight cardiac stents and an ICD. He presents for a planned three-vessel CABG after recovering from NSTEMI and pneumonia a month prior. His psychiatric regimen is duloxetine 120 mg daily, fluoxetine 80 mg daily, mirtazapine 7.5 mg daily, and gabapentin 400 mg three times per day. Preoperatively, his home cardiac regimen was evaluated by the clinic pharmacist.

Intraoperatively, he required multiple vasopressors. After seven hours in the ICU, intravenous MB was initiated. Four hours later, he required an urgent re-sternotomy for exploration and control of bleeding.

Two hours later, his vasopressor requirement minimized but later increased. His temperature was 40oC; clonus in his bilateral lower extremities, hyperreflexia, and “full-body rigors” were present. Psychiatry was consulted three days later for agitation recommendations and management of his home regimen.

Discussion: The use of MB for vasoplegia in critical care is well-documented2,3. The risk of serotonin syndrome complicating these episodes is beginning to be further elucidated2,3. Given his multiple serotonergic medications and additional as-needed medications dispensed, he was at increased risk of serotonin syndrome. The FDA suggests not administering serotonergic medications for at least two weeks, and five weeks for fluoxetine, for non-emergency use of MB along with considering the risks, benefits, and alternatives in emergent use4. Collaboration would have decreased the likelihood of this complication. Proactive intervention likely would have decreased his length of stay in both the general hospital and intensive care units given his subsequent delirium5. Electronic medical record (EMR) limitations should also be considered.

Conclusions: CL psychiatrists can work proactively with physicians and pharmacists regarding MB use in patients on multiple serotonergic medications. This work will also require education and EMR modifications to be mindful of the long-lasting effects of such medications.