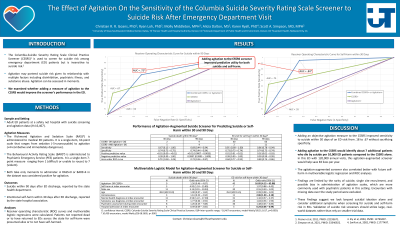 Has Audio
Background: The Joint Commission (JC) requires emergency departments (EDs) to screen for suicide risk using evidence-based tools such as the Columbia Suicide Severity Rating Scale Clinical Practice Screener (C-SSRS1), which we previously found to be insensitive to elevated suicide risk in the ED2. Inclusion of additional clinical variables beyond suicidal ideation may bolster the sensitivity of screening instruments to elevated suicide risk. Agitation is an important modifiable risk factor for suicide that is implicated in recurrent risk for suicidal behavior3. This study describes the testing characteristics of the C-SSRS with the addition of standardized assessments for agitation.

Methods: Our academic safety net hospital and level I trauma center implemented universal suicide screening in the ED with its new electronic medical record (EMR) system in 2016. We identified adult patients presenting for their first ED encounter from April 2016 to June 2018 who had suicide screening (C-SSRS) and agitation data available. Agitation was measured with the Behavioral Activity Rating Scale (BARS4) and the Richmond Agitation Sedation Scale (RASS5) which were collected as part of routine practice. The study outcomes included death by suicide or other cause within 90 days as reported by the state department of public health and suicide attempt within 30 days as reported by the state hospital association.

Discussion/Implications: Although combining agitation with suicide risk screening did not improve the low sensitivity of the C-SSRS Screener for detecting suicide risk observed in our prior study (Simpson et al., 2020), 9 of 13 suicides within 90 days of ED discharge were identified by either agitation or positive suicide screening. These findings are encouraging for standardized agitation assessments to be included in evidence-based approaches to improving the identification of elevated suicide risk in ED settings.