(PO-141) Use of an orexin antagonist for subacute delirium 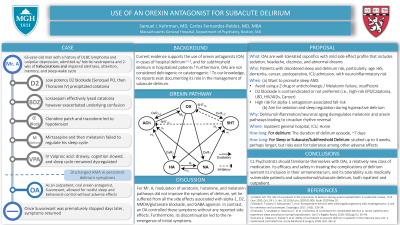 Background/Significance:
Orexin antagonism can prevent delirium (which may involve myriad neurotransmitter systems) as well as decrease its duration, while ameliorating sleep disturbances and reducing agitation in the medically ill (Adams, 2020). We report and discuss the case of an elderly man whose delirium and sleep disturbance improved in association with use of an orexin antagonist and worsened in its absence.

Case:
Mr. A, a 65-year old man with medical history of lymphoma without metastatic disease was admitted to the hospital with febrile neutropenia and a subacutely altered mental status (with impairment in attention, alertness, memory, cognition, and sleep-wake cycles). He was treated with antipsychotics which precipitated catatonia. Benzodiazepines effectively lysed catatonia however exacerbated his underlying confusion. Alpha 1 blockade led to hypotension. Antihistamines and melatonin were ineffective for sleep cycle regulation. Valproic acid was started (for agitation); he became drowsy, his cognition slowed, and his sleep cycle remained dysregulated. Oral Suvorexant (10mg) was started without adverse effect, and allowed for restful sleep and behavioral control. Once prematurely stopped days later, symptoms returned.

Discussion:
Our patient failed to improve with modulation of serotonin, histamine, and melatonin pathways. He suffered adverse effects (worsening hypotension, catatonia, somnolence and delirium) to alpha-1, dopamine and NMDA/glutamate blockade, and to GABA agonism. Orexin antagonists are well tolerated soporifics with mild side effects, most commonly causing sedation, headache, dizziness and abnormal dreams. We recommend their use in medically ill patients at risk for delirium i.e. old age, dementia, malignancy, postoperative state, ICU level of care, comorbid psychiatric illness. We recommend them when aiming for sedation and sleep regulation before or during hyperactive delirium; when GABAergic or anticholinergic medications pose a delirium risk; when melatonin fails or is insufficient; when D2 blockade is contraindicated or not preferred i.e. in malignancy, Lewy Body Dementia or HIV/AIDS; and when alpha-1 antagonism threatens hypotension. They can be safely administered orally in the inpatient setting and ICU (~7 days) and at home.

Conclusion/Implications:
Orexin inhibitors, a relatively new class of medication, are useful additions to the consultation-liaison psychiatrist’s psychopharmacologic armamentarium in the treatment of delirium with agitation in patients with co-morbid medical and psychiatric illness, and are well tolerated in patients with malignancy.