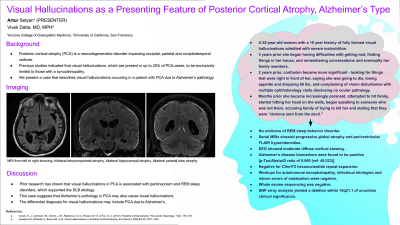 Background: Posterior cortical atrophy (PCA) is a neurodegenerative disorder impacting occipital, parietal and occipitotemporal cortices (Crutch, 2012). Previous studies indicated that visual hallucinations, which are present in up to 25% of PCA cases, to be exclusively limited to those with a synucleinopathy (Josephs, 2006). This case describes visual hallucinations occuring in a patient with PCA due to Alzheimer’s pathology.

Case: A 52 year old woman with a 10 year history of fully formed visual hallucinations was admitted with severe malnutrition in a setting of subacute cognitive decline. She had a history of depression, but 3 years prior to admission she started to have difficulty with getting lost, difficulty finding things in her house, and difficulty remembering conversations and eventually her family members. Two years prior to admission, confusion became more significant - she would be looking for things that were right in front of her, saying she was going to die, lost appetite and dropped 60 lbs, and complaining of vision disturbance with multiple ophthalmology visits disclosing no ocular pathology. In the months leading up to admission she had become increasingly paranoid, attempted to hit family, started hitting her head on the walls, began speaking to someone who was not there, accusing family of trying to kill her and stating that they were “demons sent from the devil.” She had no evidence of REM sleep behavior disorder, fluctuations of consciousness, parkinsonism or sensitivity to neuroleptics. Serial MRIs showed progressive global atrophy and periventricular FLAIR hyperintensities. EEG showed moderate diffuse cortical slowing. CSF studies were bland with a negative autoimmune encephalopathy panel. C9orf72 testing was negative for hexanucleotide repeat expansions. Additionally, Alzheimer’s disease biomarkers were found to be positive with a p-Tau/Abeta42 ratio of 0.060 (ref: ≤0.023). Whole exome sequencing demonstrated a deletion within 10q21.1 impacting the PCDH15 and ZWINT genes of unknown significance. Based on these findings, a diagnosis of Posterior Cortical Atrophy due to AD was made.

The differential diagnosis for visual hallucinations may include PCA due to Alzheimer’s.