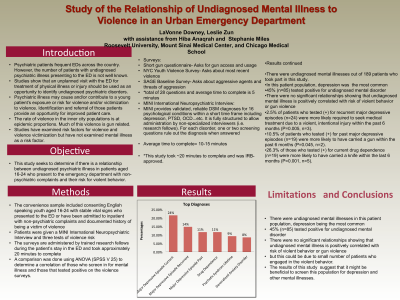 Has Audio
Objective: To determine if there was a relationship between those that tested positive for violence also testing positive for an undiagnosed mental illness.


Methods: The random sample population consisted of consenting and assenting 16-24-year-old patients, who presented at an inner city level-1 ED or inpatient with a medical complaint and documented history of violence/violence victimization. Research fellows administered the Short Gun Questionnaire, NYC Youth Violence Survey, and SAGE Baseline Survey which assess violence exposure from the number of questions answered positively and to what degree. The Mini International Neuropsychiatric Interview was subsequently administered to screen for mental illness. This study is IRB approved.

Conclusions: This study suggests that there may be a correlation between mental illness and risk of violence/victimization in this population. There were high levels of undiagnosed mental illness, especially MDD within our subject pool. These findings suggest that it may be beneficial to screen this population for depression and perhaps other mental illnesses.