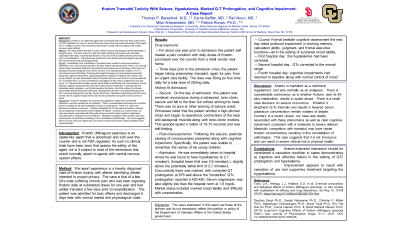 Introduction: Kratom (Mitragyna speciosa) is an opiate-like agent, with effects identical to codeine, that is advertised and sold over-the-counter and is not FDA regulated. As such no clinical trials have been done that assess the safety of this agent nor is it subject to most of the restrictions that would normally attach to agents with central nervous system effects.

Method: We report experience with a case of Kratom toxicity and disguise identifying details to project privacy. A late 20’s male suffering chronic pain had been ingesting Kratom, 6 tabs daily for one year, and added tramadol, 100mg, on the day prior to hospitalization. The patient was admitted for toxic effects and discharged 5 days later with normal mental and physiological state.

Results: Immediately prior to admission, this patient was rendered unconscious during a witnessed, tonic-clonic seizure and fell to the floor without striking his head. There is no warning but the patient emitted a high-pitched shout and experienced contractions of the neck and paraspinal muscles along with tonic-clonic motions. This episode lasted 10-15 seconds and was self-limiting. Following that, postictal slowing of consciousness presented along with cognitive impairment, specifically an inability to remember the names of his young children. He was immediately taken to hospital where he was found to have hypokalemia at 2.7 (hospital norm 3.5-5.1 mmol/L) and corrected QT prolongation at 676. Mental status included marked mood lability and difficulty with concentration. Formal bedside cognitive assessment the next day noted profound impairment in working memory, calculation ability, judgment, and frontal executive functions—all in the setting of continued mood lability. Hypokalemia had been corrected at that point and QTc correction followed the next day. By the fourth day of admission electrolytes and QTc were normal and the cognitive impairments had returned to baseline along with normal control of mood.

Discussion: Kratom is marketed as a nutritional supplement, rather than a controlled substance, and acts centrally as an analgesic. There is considerable controversy as to whether kratom, including its many metabolites, results in opiate abuse. There is a small case literature on seizure occurrence. Whether it lengthens Q-Tc intervals and results in lowered serum potassium concentration remain matters of debate. Contrary to a recent review, our case was clearly associated with these phenomena as well as clear cogntive impairment consistent with a moderate to severe delirium. A case series reports nine fatalities thought due to the combination Kratom and O-desmethyltramadol interactions. Metabolic competition with of O-desmethyltramadol may have resulted in this constellation of pathologies. This case suggests that Kratom is not an innocuous and can result in severe clinical risk to physical and cogntive health.