(PO-168) Culture bound syndrome or idiom of distress? A case of brief Jinn possession with atypical features in Afghani patient 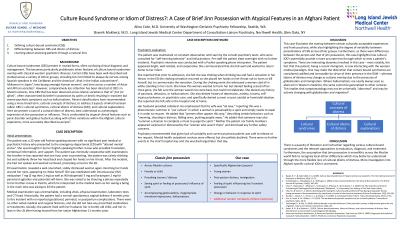 Has Audio
Introduction: Culture-bound syndromes (CBS) present in myriad forms, often confusing clinical diagnosis and management when features overlap with western psychiatric illnesses. We present a case of an Afghani immigrant who exhibited transient psychosis, panic, and a globus hystericus sensation that illustrates what may be an ethnic variation of Jinn possession, or, debatably, a cultural idiom of distress (IOD) that may be better described among Afghani patients as “Peryan”1,2.

The patient was a 22-year-old Afghani Pashto-speaking woman who came to the hospital for choking and altered mental status. In the ED, she appeared panicked, uncooperative, clutching her throat, and reported frank hallucinations necessitating sedative medications. Psychiatry was consulted for “self-harming behavior” and psychosis. The following day, she appeared appropriate, without thought disorder or hallucinations. Per collateral from family, the patient’s initial presentation was unsurprising and not worrisome within Pashtun cultural edicts. The patient was discharged without medications after thorough risk assessment.

Discussion: This case illustrates the overlap between certain culturally acceptable experiences and frank psychosis, while also highlighting the degree of variability between presentations of CBS across ethnic groups. As there were differences between “Peryan” and “Jinn” possession, this case highlights how cultural IOD’s potentially provide a more accurate lens through which to view a patient’s symptoms1. There are interesting dynamics involved in this case – most notably, the fact that this patient, being a recent immigrant, is now interacting with the western medical paradigm. One may make the distinction that culture bound syndromes are considered codified and immutable by virtue of their presence in the DSM – whereas idioms of distress may change as cultures overlap due to the pressures of globalization and immigration3. Where hallucinations are nearly always seen as aberrant in Western medicine, the same cannot be generalized to other cultures. This implies that symptomatology may not be universally “abnormal” and may active change with globalization and migration.

Conclusion: There is a paucity of literature and instruction regarding various CBSs and the relevant approaches to evaluation, diagnosis, and treatment. Furthermore, the assumption that jinn possession is monolithic across the Muslim world fails to recognize local ethnic differences which may better be understood through the more flexible lens of cultural IODs. More investigation into Afghani specific cultural IODs is warranted.