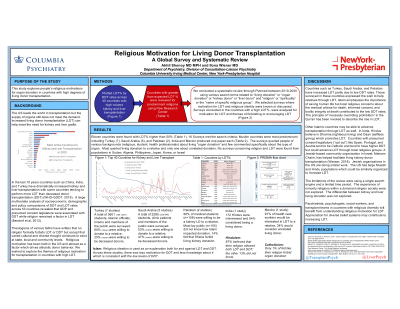 Transplantation continues to grow in the United States with supply of organs still not meeting demand and deceased donor transplantation (DDT) much more common than living donor transplantation (LDT). Religious motivation has been held in the US and abroad as an important factor which drives altruistic donor intentions. As an example, in Japan, where LDT has historically outweighed DDT, the predominant Shinto religion is used as an explanatory model for this differential. As more non-western countries have increased transplantation, we sought to understand variation in religious explanation for motivation for DDT and LDT.

Data from the 20 countries with the greatest number of transplants in 2019 were reviewed for rates of kidney and liver DDT and LDT. We conducted a review through Pubmed (2010-2020) of surveys that probed for motivation for deceased and living donor transplantation related to religious identity. Surveys conducted in the countries with high volume of kidney and liver transplantation were analyzed for themes of forbidding or encouraging organ donation.

Western countries tend to have greater rates of DDT over LDT and surveys from these countries revealed heterogenous samples and varied religious motivation for these two types of donation. Themes of Judeo-Christian acceptance of brain death are used as explanatory models for the higher levels of DDT in western countries. The growth of transplantation in China in the past 10 years has also followed a pattern of higher DDT over LDT but religious themes were not uncovered for this differential. Countries such as India, Turkey, Japan, South Korea, Mexico, Pakistan, and Saudi Arabia have also increased transplantation in the last 10 years but have markedly higher rates of LDT over DDT. Surveys about religion from these countries revealed concerns about the medical criteria for death, informed consent, bodily integrity at death and the timing of religious rites.

Most of the world’s religions do not forbid deceased or living organ donation and some encourage either one or both. Religion may be a factor in the DDT to LDT ratio in many countries. With growth of transplantation in Asia and the Middle East in the past 10 years, LDT has grown faster than DDT. Economic, legal, and socio-cultural factors in these 20 countries may also help explain the differential in DDT and LDT.

Psychiatrists, psychologists, social workers, and transplant teams in countries with religious diversity will benefit from understanding religious motivation for DDT and LDT. Appreciation for diverse belief systems may help increase both types of donation.

Global Observatory on Donation and Transplantation (GODT) data, produced by the WHO-ONT. Accessed through https://www.transplant-observatory.org/uses-of-dataquoting-data/