(PO-179) A Case of Antipsychotic-Induced Hypothermia 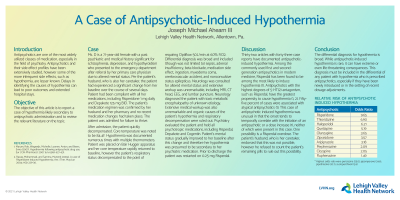 A Case of Antipsychotic-Induced Hypothermia

Introduction: Antipsychotics are one of the most widely utilized classes of medication, especially in the field of psychiatry. Antipsychotics and their side effect profiles have been extensively studied, however some of the more infrequent side effects, such as hypothermia, are lesser known. Delays in identifying the causes of hypothermia can lead to poor outcomes and extended hospital stays.

Objective: The objective of this article is to report a case of hypothermia likely secondary to antipsychotic administration and to review the relevant literature on the topic.

Case: Ms. D is a 71-year-old female with a past psychiatric and medical history significant for schizophrenia, depression, and hypothyroidism who presented to the emergency department after referral by her primary care physician due to altered mental status. Per the patient’s husband, who is also her caretaker, the patient had experienced a significant change from her baseline over the course of several days. Patient had been compliant with all her medications, including Risperidone 1 mg daily and Depakote 125 mg BID. The patient’s medication regimen was confirmed by her husband and her pharmacy and no recent medication changes had taken place. The patient was admitted for failure to thrive. After admission, the patient quickly decompensated. Core temperature was noted to be 84.4F. Hypothermia was documented numerous times with multiple thermometers. Patient was placed on Bair Hugger apparatus and her core temperature rapidly returned to baseline, however the patient’s respiratory status decompensated to the point of requiring Optiflow 50L/min at 60% FiO2. Differential diagnosis was broad and included (though was not limited to) sepsis, adrenal insufficiency, beta blockade, medication side effect, ingestion, myxedema coma, cerebrovascular accident, and nonconvulsive status epilepticus. Neurology was consulted for altered mental status and extensive workup was unremarkable, including MRI, CT head, EEG, and lumbar puncture. Neurology diagnosed the patient with toxic metabolic encephalopathy of unknown etiology. Extensive medical workup was also unremarkable and organic causes of the patient’s hypothermia and respiratory decompensation were ruled out. Psychiatry evaluated the patient and held all psychotropic medications, including Risperdal, Depakote and Cogentin. Patient’s mental status gradually improved to her baseline after this change and therefore her hypothermia was presumed to be secondary to her psychiatric medication. Prior to discharge the patient was restarted on 0.25 mg Risperdal.

Discussion: Thirty-two articles with forty-three case reports have documented antipsychotic-induced hypothermia. Among the commonly used first and second-generation antipsychotics in modern medicine, Risperdal has been found to be among the most likely to induce hypothermia (1). Antipsychotics with the highest degrees of 5-HT(2) antagonism, such as Risperdal, have the greatest propensity to cause hypothermia (1, 2). Fifty-five percent of cases were associated with atypical antipsychotics (1). This case of antipsychotic induced hypothermia was unusual in that the onset tends to temporally correlate with the initiation of an antipsychotic or a dose increase (1), neither of which were present in this case. One possibility is a Risperdal overdose. The patient’s husband, who is her caretaker, endorsed that this was not possible, however he refused to count the patient’s remaining pills to rule out this possibility.