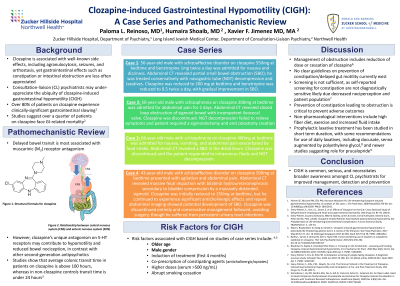 Background : Clozapine is associated with well-known side effects, including agranulocytosis, seizures, and orthostasis, yet gastrointestinal effects such as constipation or intestinal obstruction are less often appreciated despite evidence to suggest over a quarter of patients on clozapine face GI-related mortality (Palmer et al, 2008). Additionally, over 80% of patients on clozapine experience clinically-significant gastrointestinal slowing (Every-Palmer et al, 2019). Consultation-liaison (CL) psychiatrists may under-appreciate the ubiquity of clozapine-induced gastrointestinal hypomotility (CIGH) and may benefit from an enhanced understanding of it. We share four cases with varying presentations and outcomes as anchors for discussion of the under-recognized phenomenon and its pathomechanism.

Discussion: Studies show that average colonic transit time in patients on clozapine is above 100 hours, whereas in non-clozapine controls transit time is under 24 hours (Every-Palmer et al, 2019). Pathomechanism involving muscarinic and serotonin pathways is reviewed, risk factors are explored, and clinical guidelines are offered.