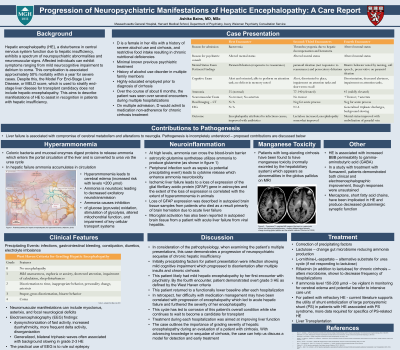 Background: Hepatic encephalopathy, a disturbance in central nervous system function due to hepatic insufficiency, exhibits a spectrum of neuropsychiatric abnormalities. This complication is associated approximately 50% mortality within a year for severe cases. Despite this, the Model For End-Stage Liver Disease, or MELD score, which is used to stratify end-stage liver disease for transplant candidacy does not include hepatic encephalopathy.

Case: D is a female in her 40s with a history of severe alcohol use and restrictive food intake resulting in chronic nutritional deficiencies and cirrhosis. She had no previous psychiatric history, her only encounters with psychiatry have been during hospitalized for acute on chronic hepatic failure due to medication non-adherence. During the initial encounter, the patient was found to be alert, oriented, and attentive without notable hallucinations, confabulation, tremor, or asterixis. During that encounter, she reported sleep disturbance and lethargy, but met no other criteria for primary affective or thought disorder. With subsequent encounters, she exhibited impaired short-term memory and paranoid ideation, ultimately developing persistent bizarre paranoid delusions, disorientation, and memory difficulties.

Discussion: This case promotes analysis of the pathophysiology and progression of hepatic encephalopathy rated over degrees of severity from mild to coma which correlate with aberrations in consciousness and cognition(Blei et al, 2001). Associated laboratory findings such as elevated ammonia and lactate as well as neuroinflammation with microglial and astrocyte activation(Butterworth, 2015) have been defined. Precipitating factors related to increase in oxidative stress have also been identified including infections, bleeding, and electrolyte derangement(Haussinger et al, 2008). In the case of this patient, she had likely had mild hepatic encephalopathy by her first encounter with psychiatry. In retrospect, her difficulty with medication management may have been correlated with progression of encephalopathy which led to acute hepatic failure and furthered the severity of her encephalopathy. This cycle has led to corrosion of this patient’s overall condition while she continues to wait to become a candidate for transplant.

Conclusion: The case outlines the importance of grading severity of hepatic encephalopathy during an evaluation of a patient with cirrhosis. With advancing knowledge in sequalae of cirrhosis, the case can help us discuss a model for detection and early treatment.