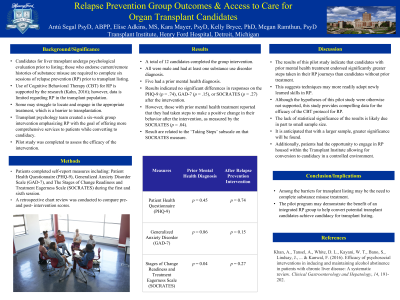 Background/Significance:  Candidates for liver transplant undergo psychological evaluation prior to listing; those who endorse current/remote histories of substance misuse are required to complete six sessions of relapse prevention (RP) prior to transplant listing. Use of Cognitive Behavioral Therapy (CBT) for RP is supported by the research (Kahn, 2016); however, data is limited regarding RP in the transplant population. Some may struggle to locate and engage in the appropriate treatment, which is a barrier to transplantation. Transplant psychology team created a six-week group intervention emphasizing RP with the goal of offering more comprehensive services to patients while converting to candidacy. Pilot study was completed to assess the efficacy of the intervention.

Results:   A total of 12 candidates completed the group intervention. All were male and had at least one substance use disorder diagnosis. Five had a prior mental health diagnosis. Results indicated no significant differences in responses on the PHQ-9 (p = .74), GAD-7 (p = .15), or SOCRATES (p = .27) after the intervention. However, those with prior mental health treatment reported that they had taken steps to make a positive change in their behavior after the intervention, as measured by the SOCRATES (p = .04).

Discussion:   The results of this pilot study indicate that candidates with prior mental health treatment endorsed significantly greater steps taken in their RP journeys than candidates without prior treatment. This suggests that individuals previously acquainted with psychotherapeutic techniques may more readily adopt newly learned skills in RP. Although the hypotheses of this pilot study were otherwise not supported, this study provides compelling data for the efficacy of the CBT protocol for RP. The lack of statistical significance of the results is likely due in part to small sample size. It is anticipated that with a larger sample, greater significance will be found. Additionally, patients had the opportunity to engage in RP housed within the Transplant Institute allowing for conversion to candidacy in a controlled environment.