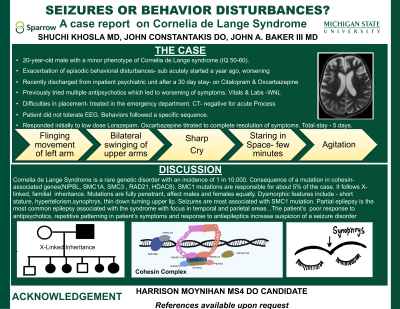 Cornelia de Lange Syndrome is a rare neurological disorder with an incidence of 1 in 10,000. It is a consequence of a mutation in cohesin-associated genes(NIPBL, SMC1A, SMC3 , RAD21, HDAC8). Mutations in NIPBL (5p13) account for 50% of cases, whereas deletions account for 5%. This gene functions in an Autosomal Dominant fashion. Most cases are sporadic without family history and there is marked variable expressivity. Mutations in SMC1L1 (Xp11.22), are responsible for 5% of cases. This gene follows X-linked inheritance and accounts for the familial forms. Mutations in these genes are fully penetrant. The disease appears to affect males and females equally. The psychological phenotype is described as intellectual disability with IQs ranging from 30 to 86, with an average of 53. Higher IQ is correlated with larger head circumference- and tends to be associated with milder phenotype. Association with seizures, headaches and migraines have been noted.
There is a paucity of literature of description of neuropsychiatric symptomatology and management and within the existing literature there appears to be a wide range of symptomatology and severity of the psychiatric and neurologic manifestations of the disorder.
We present a case of a 20-year-old male with a history of a minor phenotype of Cornelia de Lange syndrome (IQ 50-60). His dysmorphic features included short stature, hypertelorism, the presence of synophrys, thin down turning upper lip, and micromyelia. The patient presented to the emergency department with an exacerbation of behavioral disturbances. The disturbances had sub-acutely started a year ago and were worsening in frequency and duration. Behaviors included screaming, agitated behaviors, injury to others, destruction of property. No history of any behavioral disturbances prior to a year ago (age 19). The patient’s behaviors were noted to be patterned with a specific sequence, starting with flinging movement of the left arm, and progressing to a bilateral flinging movement of the upper extremity accompanied by a sharp cry. This preceded a few minutes of staring into space followed by agitation. The patient had been discharged from an inpatient psychiatric unit a week ago. During the 30 day stay on that inpatient unit, multiple antipsychotics had been tried which led to worsening of frequency of symptoms. The patient had been discharged on an SSRI (Citalopram) and a mood stabilizer (Oxcarbazepine) with partial resolution of symptoms.
Due to difficulties in placement on an inpatient unit the patient was treated in the emergency department. CT imaging of the brain showed chronically dilated ventricles with no acute changes. Vitals and Labs were within normal limits. The patient did not tolerate EEG leads being placed and hence a formal EEG was unable to be performed.
The patient responded to a low dose of Lorazepam (0.5 mg TID) with improvement in symptoms. Oxcarbazepine was titrated to complete resolution of symptoms. The total hospital course was five days after which the symptoms completely resolved.
However, poor response to antipsychotics, repetitive patterning in patient’s symptoms, and response to antiepileptics increase suspicion of a seizure disorder. Seizures are most associated with SMC1 mutation. Partial epilepsy is the most common epilepsy associated with the syndrome with the epileptic focus in temporal and parietal areas. More research is required to understand behavioral disturbances in the syndrome.