(PO-195) The utility of Phosphatidylethanol testing in assessing alcohol use in bariatric surgery candidates: A case series 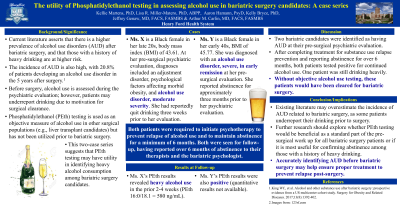 Background/Significance: Current literature asserts that there is a higher prevalence of alcohol use disorders (AUD) after bariatric surgery, and that those with a history of heavy drinking are at higher risk. The incidence of AUD is also high, with 20.8% of patients developing an alcohol use disorder in the 5 years after surgery.1 Before surgery, alcohol use is assessed during the psychiatric evaluation; however, patients may underreport drinking due to motivation for surgical clearance. Phosphatidylethanol (PEth) testing is used as an objective measure of alcohol use in other surgical populations (e.g., liver transplant candidates) but has not been utilized prior to bariatric surgery. This two-case series suggests that PEth testing may have utility in identifying heavy alcohol consumption among bariatric surgery candidates.

Cases: Ms. X is a Black female in her late 20s, body mass index (BMI) of 43.61. At her pre-surgical psychiatric evaluation, diagnoses included an adjustment disorder, psychological factors affecting morbid obesity, and alcohol use disorder, moderate severity. She had reportedly quit drinking three weeks prior to her evaluation.

Ms. Y is a Black female in her early 40s, BMI of 45.77. She was diagnosed with an alcohol use disorder, severe, in early remission at her pre-surgical evaluation. She reported abstinence for approximately three months prior to her psychiatric evaluation.

Both patients were required to initiate psychotherapy to prevent relapse of alcohol use and to maintain abstinence for a minimum of 6 months. Both were seen for follow-up, having reported over 6 months of abstinence to their therapists and the bariatric psychologist. At follow-up, Ms. X’s PEth results revealed heavy alcohol use in the prior 2-4 weeks (PEth 16:0/18.1 = 580 ng/mL). Ms. Y’s PEth results were also positive (quantitative results not available).

Discussion: Two bariatric candidates were identified as having AUD at their pre-surgical psychiatric evaluation. After completing treatment for substance use relapse prevention and reporting abstinence for over 6 months, both patients tested positive for continued alcohol use. One patient was still drinking heavily. Without objective alcohol use testing, these patients would have been cleared for bariatric surgery.

Conclusions/Implications: Existing literature may overestimate the incidence of AUD related to bariatric surgery, as some patients underreport their drinking prior to surgery. Further research should explore whether PEth testing would be beneficial as a standard part of the pre-surgical work up for all bariatric surgery patients or if it is most useful for confirming abstinence among those with a history of heavy drinking. Accurately identifying AUD before bariatric surgery may help ensure proper treatment to prevent relapse post-surgery.

1.King WC, et al. Alcohol and other substance use after bariatric surgery: prospective evidence from a US multicenter cohort study. Surgery for Obesity and Related Diseases. 2017;13(8):1392-402.