(PO-030) A Sleepless Night on Ifosfamide: A Case of Mania Following Cancer Chemotherapy 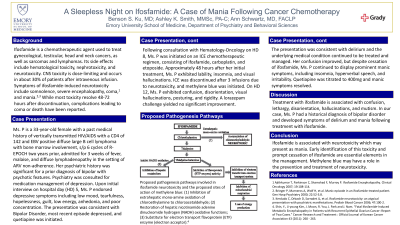 Background/Significance:
Ifosfamide is a chemotherapeutic agent used to treat gynecological, testicular, head and neck cancers, as well as sarcomas and lymphomas. Its side effects include hematological toxicity, nephrotoxicity, and neurotoxicity. CNS toxicity is dose-limiting and occurs in about 30% of patients after intravenous infusion. Symptoms of ifosfamide-induced neurotoxicity include somnolence, severe encephalopathy, coma (Ajithkumar, 2007), and mania (Brieger, 2000; Kerdudo, 2006). While most toxicity resolve 48-72 hours after discontinuation, complications leading to coma or death have been reported.

Case:
Ms. P is a 33-year-old female with a past medical history of vertically transmitted HIV/AIDS with a CD4 of 142 and EBV positive diffuse large B cell lymphoma with bone marrow involvement, s/p 6 cycles of R-EPOCH two years prior, admitted for 3 weeks of fever, malaise, and diffuse lymphadenopathy in the setting of ARV non-adherence. Her psychiatric history was significant for a prior diagnosis of bipolar with psychotic features. Psychiatry was consulted for medication management of depression. Upon initial interview on hospital day (HD) 5, Ms. P endorsed depressive symptoms including low mood, tearfulness, hopelessness, guilt, low energy, anhedonia, and poor concentration. The presentation was consistent with Bipolar Disorder, most recent episode depressed, and quetiapine was initiated. Following consultation with Hematology-Oncology on HD 8, Ms. P was initiated on an ICE chemotherapeutic regimen, consisting of ifosfamide, carboplatin, and etoposide. Approximately 48 hours after her initial treatment, Ms. P exhibited lability, insomnia, and visual hallucinations. ICE was discontinued after 3 infusions due to neurotoxicity, and methylene blue was initiated. On HD 12, Ms. P exhibited confusion, disorientation, visual hallucinations, posturing, and rigidity. A lorazepam challenge yielded no significant improvement. The presentation was consistent with delirium and the underlying medical condition continued to be treated and managed. Her confusion improved, but despite cessation of ifosfamide, Ms. P continued to display prominent manic symptoms, including insomnia, hyperverbal speech, and irritability. Quetiapine was titrated to 400mg and manic symptoms resolved.

Ifosfamide is associated with neurotoxicity which may present as mania. Early identification of this toxicity and prompt cessation of ifosfamide are essential elements in the management. Methylene blue may have a role in the prevention and treatment of neurotoxicity.