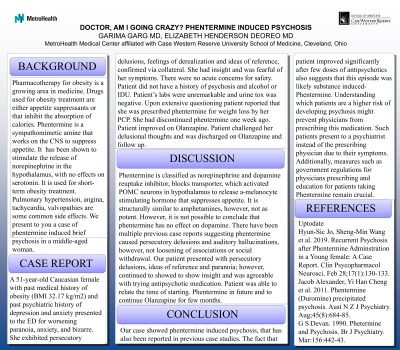 Background: Pharmacotherapy for obesity is a growing area in medicine. Drugs used for obesity treatment are either appetite suppressants or that inhibit the absorption of calories. Phentermine is a sympathomimetic amine that works on the CNS to suppress appetite. It has been shown to stimulate the release of norepinephrine in the hypothalamus, with no effects on serotonin. It is used for short-term obesity treatment. Pulmonary hypertension, angina, tachycardia, valvopathies are some common side effects. We present to you a case of phentermine induced brief psychosis in a middle aged woman.

Case presentation: A 51-year-old Caucasian female with past medical history of obesity (BMI 32.17 kg/m2) and past psychiatric history of depression and anxiety presented to the ED for worsening paranoia, anxiety, and bizarre behavior. She exhibited persecutory delusions, feelings of derealization and ideas of reference, confirmed via collateral. She had insight and was fearful of her symptoms. There were no acute concerns for safety. Patient did not have a history of psychosis and alcohol or IDU. Patient’s labs were unremarkable and urine tox was negative. Upon extensive questioning patient reported that she was prescribed phentermine for weight loss by her PCP. She had discontinued phentermine one week ago. Patient improved on Olanzapine. Patient challenged her delusional thoughts and was discharged on Olanzapine and follow up.

Discussion: Phentermine is classified as norepinephrine and dopamine reuptake inhibitor, blocks transporter, which activates POMC neurons in hypothalamus to release a-melanocyte stimulating hormone that suppresses appetite. It is structurally similar to amphetamines, however, not as potent. However, it is not possible to conclude that phentermine has no effect on dopamine. There have been multiple previous case reports suggesting Phentermine caused persecutory delusions and auditory hallucinations, however, not loosening of associations or social withdrawal. Our patient presented with persecutory delusions, ideas of reference and paranoia; however, continued to show insight and was agreeable with trying antipsychotic medication. Patient was able to relate the timeline of starting Phentermine with the onset of psychotic symptoms. She was advised to avoid phentermine in future and to continue Olanzapine for few months.

Conclusion: Our case showed phentermine induced psychosis, that has also been reported in previous case studies. The fact that patient improved significantly after few doses of antipsychotics also suggests that this episode was likely substance induced- Phentermine. Understanding which patients are at higher risk of developing psychosis might prevent physicians from prescribing this medication. Such patients present to a psychiatrist instead of the prescribing physician due to their symptoms. Additionally, measures such as government regulations for physicians prescribing and education for patients taking Phentermine remain crucial.