(PO-035) Diagnoses of Exclusion: A Diagnostic Dilemma in an 83-Year-Old Patient with Acute Psychosis 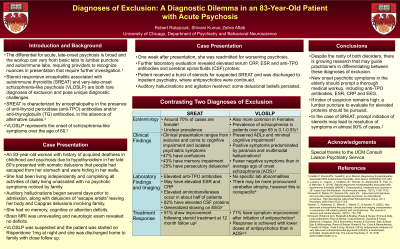 Background: Steroid responsive encephalitis associated with autoimmune thyroiditis (SREAT) and very-late-onset schizophrenia-like psychosis (VLOSLP) are both rare diagnosis of exclusion and pose unique diagnostic challenges. The differential for acute, late-onset psychosis is broad and the workup can vary from basic labs to lumbar puncture and autoimmune labs, requiring providers to recognize nuances in presentation that require further investigation [1].

An 83-year-old woman with history of acquired deafness in childhood and psychosis due to hypothyroidism in her late 60’s presented with new complaints that people had escaped from her stomach and were hiding in her home’s walls. She had been living independently and completing all activities of daily living unassisted with no psychotic symptoms noticed by family. She reported auditory hallucinations that began several days prior to admission, along with “escape artists” that had left her body along with Capgras delusions involving family. She had no memory, cognitive or attention deficits. Her delusions became less distressing after initiating 1mg risperidone at night. A brain MRI was unrevealing and no deficits where noted on neurological exam. VLOSLP was suspected and she was discharged home to family with close follow up.

Discussion: New onset psychosis without notable cognitive deficits in elderly patients can pose many diagnostic challenges. It is crucial to differentiate VLOSLP from more reversible causes, such as SREAT. The unique aspects of this case, such as the patient’s prior history of psychosis due to hypothyroidism, along with the bizarre delusions as opposed to predominantly paranoid delusions with derogatory auditory hallucinations following a prodromal phase in VLOSLP, and other aspects may help future practitioners determine laboratory evaluation, including anti-TPO, serum inflammatory markers and CSF studies in order to evaluate for a reversible diagnoses [1],[2].

Conclusion: Despite the rarity of both disorders, there is growing research that may guide practitioners in differentiating between these diagnoses of exclusion. A pertinent and succinct review of the latest literature will help providers navigate these still poorly understood and often misdiagnosed disorders.