(PO-170) (PO-170) Tipping the Scales: Identifying a Surrogate Decision-Maker for an Incarcerated Patient 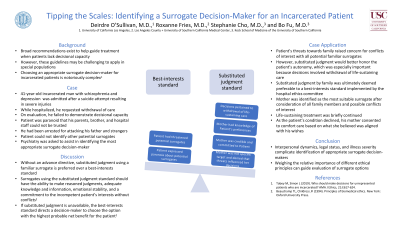 Background: Consultation-liaison psychiatrists routinely encounter patients with impaired decisional capacity who would benefit from a surrogate decision-maker’s assistance. Although guidelines on surrogate selection exist, real-world patients do not always fit neatly into algorithms. Additional considerations are often needed in complicated social situations and vulnerable populations, such as incarcerated patients.1 This case illustrates ways in which hierarchical ethical principles were applied to find the most suitable surrogate for an incarcerated patient.

Case: A 41-year-old incarcerated man with schizophrenia and major depressive disorder sustained critical injuries following a suicide attempt. After several weeks in the intensive care unit, he requested withdrawal of care, but was determined to lack decisional capacity for this request. Due to paranoid ideations, the patient expressed concern his family and hospital staff could not be trusted. Additionally, he had been arrested after attacking his father and strangers and threatening his family. He could not identify other potential surrogates. Psychiatry was asked to provide an opinion regarding a suitable surrogate decision-maker.

Case Application: The patient's threats towards his family raised concerns for conflicts of interest with all potential familiar surrogates. However, substituted judgment would better honor the patient's autonomy. Autonomy was especially important because decisions involved withdrawal of life-sustaining care.

Substituted judgment by family was ultimately deemed preferable to a best-interests standard implemented by the hospital ethics committee. The patient’s mother was determined to be the most suitable surrogate decision-maker because she had knowledge of the patient’s preferences but was not the specific target of his assault. Although the patient had threatened his mother in the context of paranoia, she denied his threats had bearing on her decisions. She was found to be credible, knowledgeable, and committed to her son. Life-sustaining treatment was continued briefly. However, as the patient’s condition declined, his mother consented to comfort care based on what she believed was aligned with his wishes.