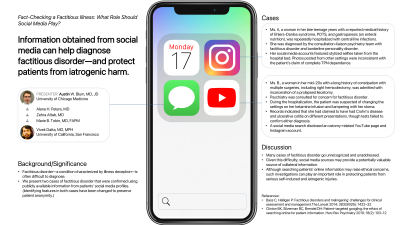 Cases: (1) Ms. A, a woman in her late teenage years with a reported medical history of Ehlers-Danlos syndrome, POTS, and gastroparesis (on enteral nutrition), was repeatedly hospitalized with central line infections. She was diagnosed by the consultation-liaison psychiatry team with factitious disorder and borderline personality disorder. Her social media accounts featured stylized selfies taken from the hospital bed. Photos posted from other settings were inconsistent with the patient’s claim of complete TPN dependence. (2) Ms. B., a woman in her mid-20s with a long history of constipation with multiple surgeries, including right hemicolectomy, was admitted with incarceration of a prolapsed ileostomy. Psychiatry was consulted for concern for factitious disorder. Specifically, during the hospitalization, the patient was suspected of changing the settings on her ketamine infusion and tampering with her stoma. Records indicated that she had claimed to have had Crohn’s disease and ulcerative colitis on different presentations, though tests failed to confirm either diagnosis. The psychiatric consultant noted that she sought opioids from multiple different physicians, dentists, and from emergency department visits. A social media search disclosed an ostomy-related YouTube page, including video of her prolapsing ostomy and an Instagram account that was ostomy-focused, which supported a diagnosis of factitious disorder, as opioid use disorder alone did not appear to explain her presentations. (Identifying features in both cases have been changed to preserve patient anonymity.)

Discussion: Many cases of factitious disorder go unrecognized and unaddressed. The appropriate diagnosis is often made only after an extensive search of electronic medical records, if at all (Bass and Halligan, 2014). Given this difficulty, we suggest that in at least some cases of suspected factitious disorder, social media sources may provide a potentially valuable source of collateral information. Although searching patients’ online information may raise ethical concerns (Clinton et al., 2010), such investigations can play an important role in protecting patients from serious self-induced and iatrogenic injuries.

Conclusion/Implications: Information obtained from social media may be useful in making a diagnosis of factitious disorder. Such searches are clinically and ethically appropriate when motivated by the need to prevent iatrogenic harm.