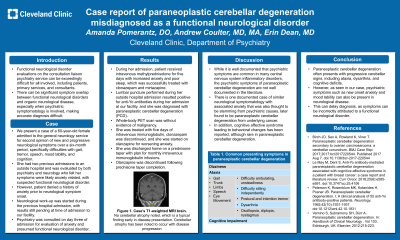 Methods:
We present a case of a 60-year-old female admitted to the general neurology service for second opinion of new and progressive neurological symptoms over a six-month period, specifically difficulties with gait, tremor, speech, mood lability, and cognition. She had two previous admissions to an outside hospital and was evaluated by both psychiatry and neurology who felt her symptoms were likely anxiety related, with suspected functional neurological disorder. However, patient denied a history of anxiety prior to neurological symptom onset. Neurological work-up was started during the previous hospital admission, with results still pending at time of admission to our facility. Psychiatry was consulted on day three of admission for evaluation of anxiety and presumed functional neurological disorder.

Results:
During her admission, patient received intravenous methylprednisolone for five days with increased anxiety and poor sleep, which was successfully treated with clonazepam and mirtazapine. Lumbar puncture performed during her outside hospital admission resulted positive for anti-Yo antibodies during her admission at our facility, and she was diagnosed with paraneoplastic cerebellar degeneration. She was treated with five days of intravenous immunoglobulin, clonazepam was discontinued, and she was started on olanzapine for worsening anxiety. She was discharged home on a prednisone taper with plan for monthly intravenous immunoglobulin infusions. Olanzapine was discontinued following prednisone taper completion.

Conclusion:
Paraneoplastic cerebellar degeneration often presents with progressive cerebellar signs, including ataxia, dysarthria, and cognitive deficits. However, as seen in our case, psychiatric symptoms such as new onset anxiety and mood lability can also be present in neurological disease. This can delay diagnosis, as symptoms can be incorrectly attributed to a functional neurological disorder.