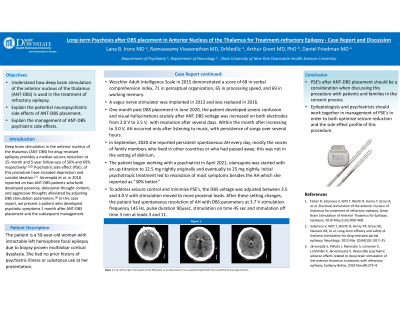 Background/Significance: Implantation of Deep Brain Stimulation devices in the anterior nucleus of the thalamus (ANT DBS) as treatment for medication resistant epilepsy is a growing practice. We report a case where a patient developed new onset psychotic symptoms one month after placement of ANT DBS device for treatment of medication resistant epilepsy.

Case: 50 year old woman with a history of intractable left hemisphere focal epilepsy due to cortical dysplasia and frequent hospitalizations for status epilepticus. Due to the medication resistance of her seizure disorder, a vagus nerve stimulator was placed without improvement to her seizures, this was followed by ANT DBS placement in June 2020. Prior to the DBS procedure, the patient had only a past psychiatric history of post-ictal paranoia in the setting of post-ictal delirium. The patient first developed transitory auditory hallucinations (AH) and on and off again visual hallucinations in the first month after placement. Two months after placement, recurrent seizure episodes returned leading to admission to a sub-acute rehabilitation facility four months after ANT DBS insertion. The psychotic symptoms worsened during this time and became persistent, with development of paranoia outside of the post-ictal period and were not associated with delirium. The patient was referred to outpatient psychiatry who provided management with neuroleptic medications leading to resolution of most symptoms except for AH which were reported as only 30% improved. In an effort to both manage her seizure disorder and reduce the burden of psychiatric side effects (PSE's), DBS settings were adjusted, including the voltage and a change to proximal leads on the DBS device with spontaneous resolution of symptoms in late July 2021.

Conclusion/Implications: As ANT DBS continues to be used to treat medication resistant epilepsy, it becomes important to understand the potential for PSE's. Due to the risk of PSE's, they should be considered during the informed consent process. After placement of ANT DBS devices, epileptologists and psychiatrists should work collaboratively in the management of these patients' symptoms in order to optimize seizure reduction and manage the PSE's that may arise.