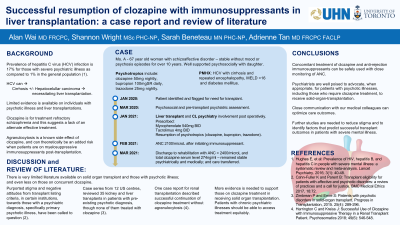 Background/Significance:
Prevalence of hepatitis C is 17% for those with severe psychiatric illness as compared to 1% in the general population (1). Individuals with hepatitis C virus (HCV) can suffer from disease progression that ultimately necessitates liver transplantation due to decompensated cirrhosis or hepatocellular carcinoma (HCC) without cirrhosis. There is a paucity of literature to inform liver transplantation for those with psychotic illness, specifically those receiving clozapine treatment. Clozapine is indicated for treatment refractory schizophrenia. Agranulocytosis, a known side effect of clozapine, is an additive risk for patients on myelosuppressive immunosuppressants post-transplantation. Here we report a case of a patient who successfully resumed clozapine treatment post liver-transplantation.

Discussion:
Limited literature is available on solid-organ-transplants for patients with psychotic disorders and those treated with clozapine; this is possibly related to stigma purportedly inherent in some listing criteria relating to transplant candidates with psychiatric, specifically psychotic, diagnoses (2). A case series reviewed 35 kidney and liver transplants in patients with pre-existing psychotic disorder diagnosis, although none of the patients were treated with clozapine (3). One case report for renal transplantation described successful continuation of clozapine treatment without agranulocytosis (4).

Conclusion/Implications:
Psychiatrists are well poised to advocate, when appropriate, for patients with psychotic disorders, including those requiring clozapine treatment, to receive solid-organ-transplantation. Clozapine and anti-rejection-immunosuppressants can be safely used together. Further investigation of factors that predict successful outcomes in patients with severe mental illness and solid-organ-transplantation can reduce stigma and ensure equitable access to this life-saving intervention.

References:
1. Hughes E, et al: Prevalence of HIV, hepatitis B, and hepatitis C in people with severe mental illness: a systematic review and meta-analysis. Lancet Psychiatry 2016;3(1):40-48.
2. Cahn-Fuller K and Parent B: Transplant eligibility for patients with affective and psychotic disorders: a review of practices and a call for justice. BMC Medical Ethics 2017;18:72.
3. Zimbrean P and Emre S: Patients with psychotic disorders in solid-organ transplant. Progress in Transplantation 2015;25(4):289-296.

4. Harrington C and Kreiss J: Successful Use of Clozapine with Immunosuppressive Therapy in a Renal Transplant Patient. Psychosomatics 2018;49(6):546-548.