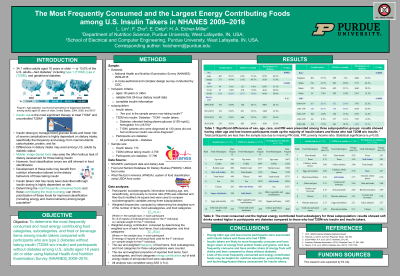 Objectives: Insulin takers’ diets have rarely been described although insulin dosing is highly dependent on dietary intake. The objective was to determine the most frequently consumed food or beverage items, food subcategories, and food categories, and items that contributing most to total energy intake among U.S. adult insulin takers compared with those with type 2 diabetes without taking insulin (T2D w/o insulin) and those without diabetes.

Methods: Fasting plasma glucose and hemoglobin A1c concentration from the laboratory tests and diabetic and insulin taking status from questionnaires in the National Health and Nutrition Examination Survey 2009–2016 classified 907 insulin takers, 2,758 T2D w/o insulin, and 34,360 participants without diabetes. U.S. Department of Agriculture Food codes of each item reported in the first reliable 24-hour dietary recall, were categorized by food subcategory and category based on What We Eat in America categories. Raw and weighted frequency and energy contributions of each food item, food subcategory, and food category were calculated and ranked.

Conclusions: Differences in dietary intake may exist among U.S. adults by diabetic status. Insulin takers are likely to consume more protein foods and less soft drinks compared to those with T2D w/o insulin and those without diabetes. Lists of the most frequently consumed foods and foods contributing most to energy may be helpful for nutrition education, prescribing diets, and technology-based dietary assessment for insulin takers.