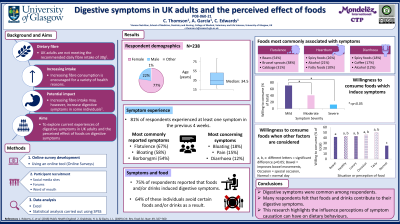 Objectives: Fibre intakes in UK adults are below recommended levels, therefore, individuals should be encouraged to increase their consumption of fibrous foods.  However, this could increase digestive symptoms in some people. To establish to what extent this might be a problem, we sought to better understand the experience of digestive symptoms and the perceived effect of foods in the UK adult population.

Methods: An online self-administered survey was developed using an online tool (Online Surveys) and participants were recruited via social media sites including Facebook, Twitter, LinkedIn, Reddit, forums and via word of mouth.

Results: Of the 238 individuals who completed the survey, 81% reported having at least 1 digestive symptom in the previous 4 weeks. The age range of respondents was 18-82 years: 77% female, 22% male and 0.4% other. The most reported symptoms were flatulence (67%), abdominal bloating (58%) and borborygmi (54%).  The most concerning symptoms for respondents were abdominal bloating/distension (19%), abdominal pain and diarrhoea (both 17%). Certain foods/drinks were perceived causes of digestive symptoms in 75% of respondents and 64% routinely avoid certain foods/drinks because of this. Beans, carbonated soft drinks and spicy foods were the most common perceived causes of flatulence (30%), belching (16%) and heartburn (15%) respectively. There was a negative correlation between willingness to consume foods which induce digestive symptoms and severity of the symptoms (r=-.521, p< 0.001). Increased willingness to consume foods which induce symptoms was reported when respondents found a food tasty, perceived it as healthy or it was consumed on a special occasion or seen as a luxury item compared to under normal circumstances (p < 0.001).

Conclusions: Digestive symptoms were common among respondents and the extent to which symptoms affected individuals and influenced dietary choices varied widely.  This research also demonstrates that individuals may tolerate increased digestive symptoms related to food consumption under certain circumstances.

Funding Sources: This research was funded by a BBSRC PhD studentship and Mondelez International.