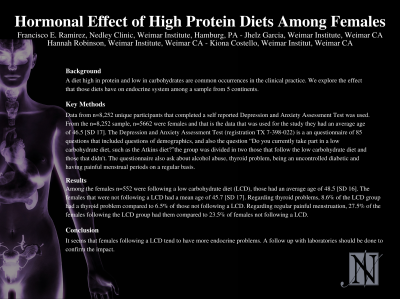 Objectives: A diet high in protein and low in carbohydrates are common occurrences in the clinical practice. We explore the effect that those diets have on endocrine system among a sample from 5 continents.

Methods: Data from n=8,252 unique participants that completed a self reported Depression and Anxiety Assessment Test was used. From the n=8,252 sample, n=5662 were females and that is the data that was used for the study they had an average age of 46.5 [SD 17]. The Depression and Anxiety Assessment Test (registration TX 7-398-022) is a an questionnaire of 85 questions that included questions of demographics, and also the question “Do you currently take part in a low carbohydrate diet, such as the Atkins diet?” the group was divided in two those that follow the low carbohydrate diet and those that didn't. The questionnaire also ask about alcohol abuse, thyroid problem, being an uncontrolled diabetic and having painful menstrual periods on a regular basis.

Regarding regular painful menstruation, 27.5% of the females following the LCD group had them compared to 23.5% of females not following a LCD.

Regarding current alcohol abuse, 8.9% following the LCD had them compared to 7.6% of those not following a LCD.

Conclusions: It seems that females following a LCD tend to have more endocrine problems. A follow up with laboratories should be done to confirm the impact.