(P08-054-21) Associations Between Late Evening Food Consumption and Exceeding Estimated Energy Needs in U.S. Adults: Results From What We Eat in America, NHANES 2013-2016 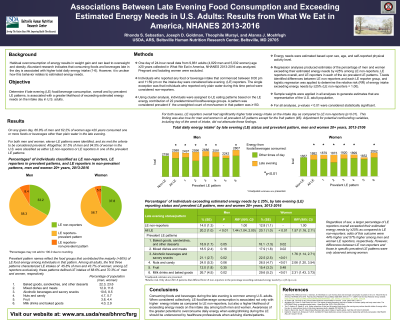 Objectives: Eating later in the day has been associated with higher daily energy intake.  However, it is unclear how this behavior relates to energy needs. The goal of this study was to determine whether late evening (LE) food and beverage consumption, overall and by previously identified prevalent LE food patterns, is associated with exceeding estimated daily energy needs.

Methods: One day of dietary intake collected from 9,861 adults 20+ years of age (4,829 men and 5,032 women) in What We Eat in America, NHANES 2013-2016 was analyzed.  LE consumption was defined as any food/beverage intake excluding plain water that began between 8:00 pm and 11:59 pm. Individuals’ energy needs were estimated based upon sex, age, and self-reported physical activity. T-tests identified differences in the percentages of adults exceeding their estimated energy needs by ≥25% between LE non-reporters and LE reporters, overall and by prevalent LE pattern, and logistic regression was applied to determine the relative risk (RR) of this outcome.

Conclusions: Although LE intake overall was associated with a greater likelihood of exceeding estimated energy needs by ≥25% among both men and women, pattern-specific associations were only observed among women. Addressing both the frequency and content of LE consumption could attenuate its impact on potential excess energy intake in this population.