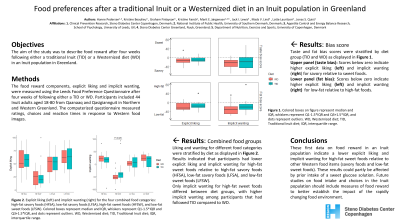 Objectives: The overall aim was to describe food reward in an Inuit population in Greenland. More specifically, the objective was to first test the differences in food reward for sweet relative to savory food (taste bias) after four weeks on a traditionally Inuit diet (TID) vs a Westernized diet (WD). If no differences in taste bias were found between diet groups, we aimed to describe food reward in a pooled sample (median [IQR]). We hypothesized that participants would have higher preferences for sweet compared to savory foods.

Methods: After a dietary intervention in Greenland (20% of foods provided), we measured behavioral components of food reward using the Leeds Food Preference Questionnaire. The reward components, explicit liking and implicit wanting, were measured in response to images of Western foods varying in fat content and taste after four weeks on either TID or WD. A positive bias score reflected preference for sweet over savory, and oppositely a negative bias score reflected preference for savory over sweet foods.

Conclusions: This is the first study to examine explicit and implicit aspects of food reward in an Inuit population. Contrary to our hypothesis, this population did not prefer sweet over savory Western foods.

Funding Sources: The study was supported by unrestricted grants from The Novo Nordisk Foundation. Royal Greenland and the supermarket chains Kalaallit Nunaanni Brugseni & Pilersuisoq supported the study with foods and food logistics.