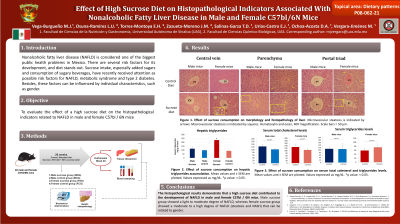 Objectives: To evaluate the effect of a high sucrose diet on the histopathological indicators related to NAFLD in male and female mice of the C57bl / 6N strain.

Methods: Forty male and female mice of the C57bl/6N strain were randomly divided into four experimental groups: Control male (CMG) and female groups (CFG) with a standard diet (Rodent Chow) and tap water, as well as sucrose male (SMG) and female groups (SFG) which received standard diet and a 50% sucrose water solution. All the groups were fed ad libitum to one of the two different diets for 20 weeks. After 20 weeks, mice were sacrificed.  Blood, hepatic and adipose tissues were collected for analyses. Hepatic tissues were sectioned and stained with hematoxylin and eosin. Samples were examined by light microscopy to analyze liver damage. The non-alcoholic steatohepatitis (NASH) degree was determined according to the histological score system proposed by the clinical research network of NASH.

Results: In hepatic histological samples of MCG, a normal parenchyma formed by hepatocytes with a conserved architecture was observed, in which the cytoplasm and the nucleus can be appreciated. According to the histological score system of the clinical research network of NASH, it was not considered into any NASH grade. FCG showed few microvesicles in parenchyma, developing grade 1 of NASH, with microvesicular steatosis, not considered pathological. Compared to sucrose groups, in MSG were observed presence of moderate microvesicular steatosis, moderate metabolic stress, and glycogen condensation. No presence of inflammatory infiltrate, inflammation, or granulomas, developing grade 4 of NASH. On the other hand, FSG showed a wide spread of macrovesicular steatosis (zones 1, 2 and 3 of liver acinus), presence of inflammatory infiltrate and granulomas in the liver parenchyma. High metabolic stress in the three zones and glycogen condensation, with the loss of histological architecture, positioning in grade 6 of NASH.

Conclusions: A high sucrose diet contributed to develop NAFLD in mice of the C57bl / 6n strain. MSG showed light to moderate degree of NAFLD, whereas FSG showed a moderate to a high degree of NAFLD (steatosis and NASH) related to sucrose consumption.

Funding Sources: This work was supported by the Universidad Autónoma de Sinaloa.