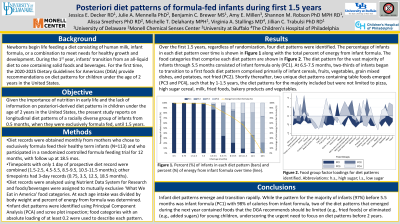 Objectives: For the first time in American history, the 2020-2025 Dietary Guidelines for Americans (DGA) focus on the diet patterns of children under age two. Given the importance of nutrition in early life, the present study reports on the longitudinal data-derived diet patterns of a racially diverse group of infants from the age of 0.5 months, when they were exclusively formula fed, until 1.5 years.

Methods: Weighed/measured diet records were obtained monthly from enrollment (0.5 months) to 1 year, and at 1.5 years during a trial on healthy infants who were randomized to one of two isocaloric commercial infant formulas. Diet records were analyzed using Nutrient Data System for Research from which foods and beverages were assigned to mutually exclusive ‘What We Eat in America’ food categories; each infant’s intake was standardized (g/kg body weight) at each age. Principal component analysis and scree plot inspection were used to derive diet patterns; an absolute loading of at least 0.2 indicated food categories highly correlated within a diet pattern.

Results: Over the first 1.5 years, regardless of randomization, four diet patterns were identified. The diet pattern for the vast majority of infants at 4.5-5.5 months consisted of iron-fortified infant formula. At 6.5-7.5 months, two-thirds of infants began to transition to a first foods diet pattern comprised primarily of infant cereals, fruits, vegetables, grain mixed dishes, and potatoes (not fried). Shortly thereafter, two unique diet patterns containing table foods emerged, such that by 1-1.5 years, the diet patterns for the majority included but were not limited to pizza, high sugar cereal, milk, fried foods, bakery products and vegetables.

Conclusions: Infant diet patterns emerge and transition rapidly. While the pattern for the majority of infants was infant formula at or before 5.5 months, as recommended, the diet patterns that emerged during the next 6-12 months contained foods that the DGA recommends should be limited (e.g., fried foods) or eliminated (e.g., added sugars) for young children, underscoring the urgent need to focus on diet patterns before 2 years.