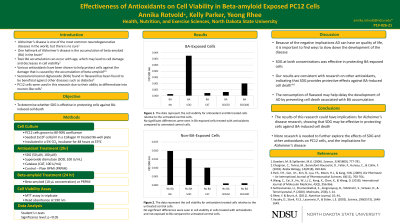 Objectives: Beta-amyloid (BA) is toxic to cells, and leads to cell damage, decreasing cell viability. Certain antioxidants, however, have been shown to prevent BA induced cell damages. The purpose of this research was to determine whether antioxidants affect the viability of PC12 cells that have been exposed to BA.

Funding Sources: This research was funded by the College of Human Sciences and Education at North Dakota State University.