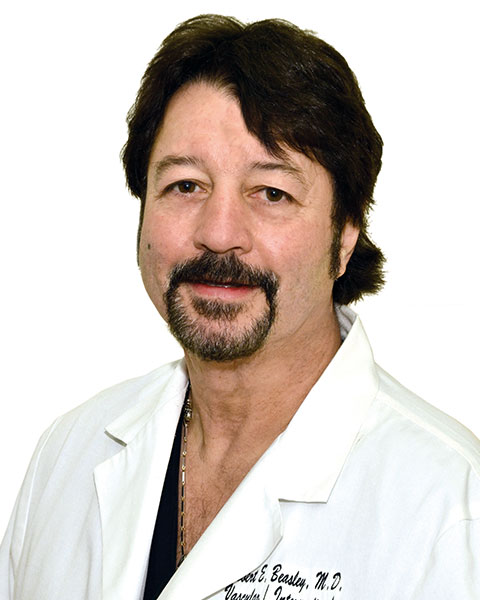 Robert E. Beasley, MD, FSIR, FSCAI, is a board-certified vascular and interventional radiologist. He earned his medical degree from Wake Forest University School of Medicine, Winston-Salem, NC. He completed a diagnostic radiology residency and fellowships in vascular interventional procedures and neuroradiology at University of Miami/Jackson Memorial Medical Center, FL. He has Special Qualifications in Vascular/Interventional Radiology. He joined the Medical Staff at Mount Sinai in 2002.
An expert in carotid artery stenting, Dr. Beasley participated in a clinical trial that paved the way for Medicare to approve the treatment as a reimbursable procedure. He is also participating in the NIH-sponsored CREST-2 carotid stent trial. He has a robust vascular practice for the treatment of PVD, CLI and endovascular repair of Aortic Aneurysms. He served as Director of Vascular/Interventional Radiology and Vein Center and the Director of the Wound Healing Center at Mount Sinai Medical Center from 2006 until 2021. He now is Medical Director of Research at Palm Vascular Centers.
Dr. Beasley has participated in more than 75 clinical trials, many as National PI, and has authored numerous publications in peer-reviewed medical journals. He has presented his work at more than 150 regional, national, and international medical meetings.
Dr. Beasley is a member and Fellow of the Society of Interventional Radiologists and Society for Cardiac Angiography and Interventions.