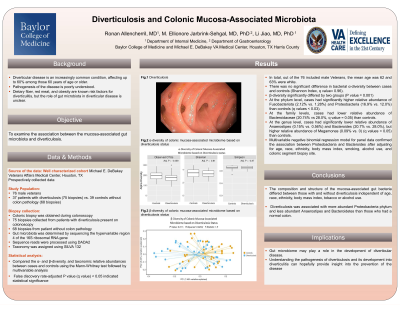 Methods: We performed an age-, race-, and sex-matched case-control study in adult men, including 37 patients with diverticulosis (75 biopsies) vs. 39 controls without colon pathology (68 biopsies). Colonic biopsy was obtained during colonoscopy. Gut microbiota was determined by sequencing the hypervariable region 4 of the 16S ribosomal RNA gene. The sequence reads were processed using DADA2 and the taxonomy was assigned using SILVA 132. We compared the α- and β-diversity, and taxonomic relative abundances between cases and controls using the Mann-Whitney test followed by multivariable analysis. False discovery rate-adjusted P value (q value) < 0.05 indicated statistical significance.

Discussion: The composition and structure of the mucosa-associated gut bacteria differed between those with and without diverticulosis. Diverticulosis was associated with more abundant Proteobacteria phylum and less abundant Anaerostipes and Bacteroidetes than those who had a normal colon.