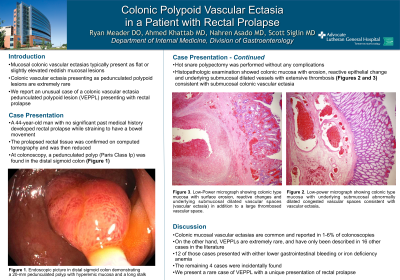 Introduction: Mucosal colonic vascular ectasias (VE) are not an uncommon cause of lower gastrointestinal bleeding (GIB), especially in the elderly. They typically present as flat or slightly elevated reddish mucosal lesions. On the other hand, colonic VE presenting as pedunculated polypoid lesions (VEPPL) are extremely rare. We report a case of colonic VEPPL in a patient presenting with rectal prolapse.

Case Description/Methods: A healthy 44-year-old man with no significant past medical history presented to the emergency room with rectal pain that developed while straining trying to have a bowel movement. He had no prior history of rectal bleeding and had no other gastrointestinal complaints. His mother died of colon cancer in her 50s. Physical examination revealed prolapsed rectal tissue. Hemoglobin was 16 g/dL and mean corpuscular volume was 92.6 fL. Computed tomography confirmed rectal prolapse but could not exclude an underlying rectal mass. The prolapsed rectum was successfully reduced, and he was referred to our office for colonoscopy. A 20 mm-pedunculated polyp (Paris class Ip) with hyperemic mucosa and a long stalk was found in the distal sigmoid colon (Figure 1). Hot snare polypectomy was performed without complications. Histopathologic examination showed colonic mucosa with erosion, reactive epithelial change, and underlying submucosal dilated vessels with extensive thrombosis (Figure 2). A diagnosis of colonic vascular ectasia was made.

Discussion: In contrast to colonic mucosal VE which are reported in 1-6% of colonoscopies, VEPPL are extremely rare and have only been described in 16 other cases in the literature. Twelve of those cases presented with either lower GIB or iron deficiency anemia (IDA) while the remaining four were incidentally found in asymptomatic patients. Endoscopically, VEPPL can be easily mistaken for adenomatous polyps. The presence of a hyperemic mucosa with a fern-like pattern or ectatic blood vessels radiating from a central vessel are suggestive of VEPPL. Most reported cases were successfully removed endoscopically by either snare polypectomy or mucosal resection. In conclusion, while all other reported cases of VEPPL were either asymptomatic or presented with lower GIB or IDA, we present a rare case of VEPPL with a unique presentation of rectal prolapse. 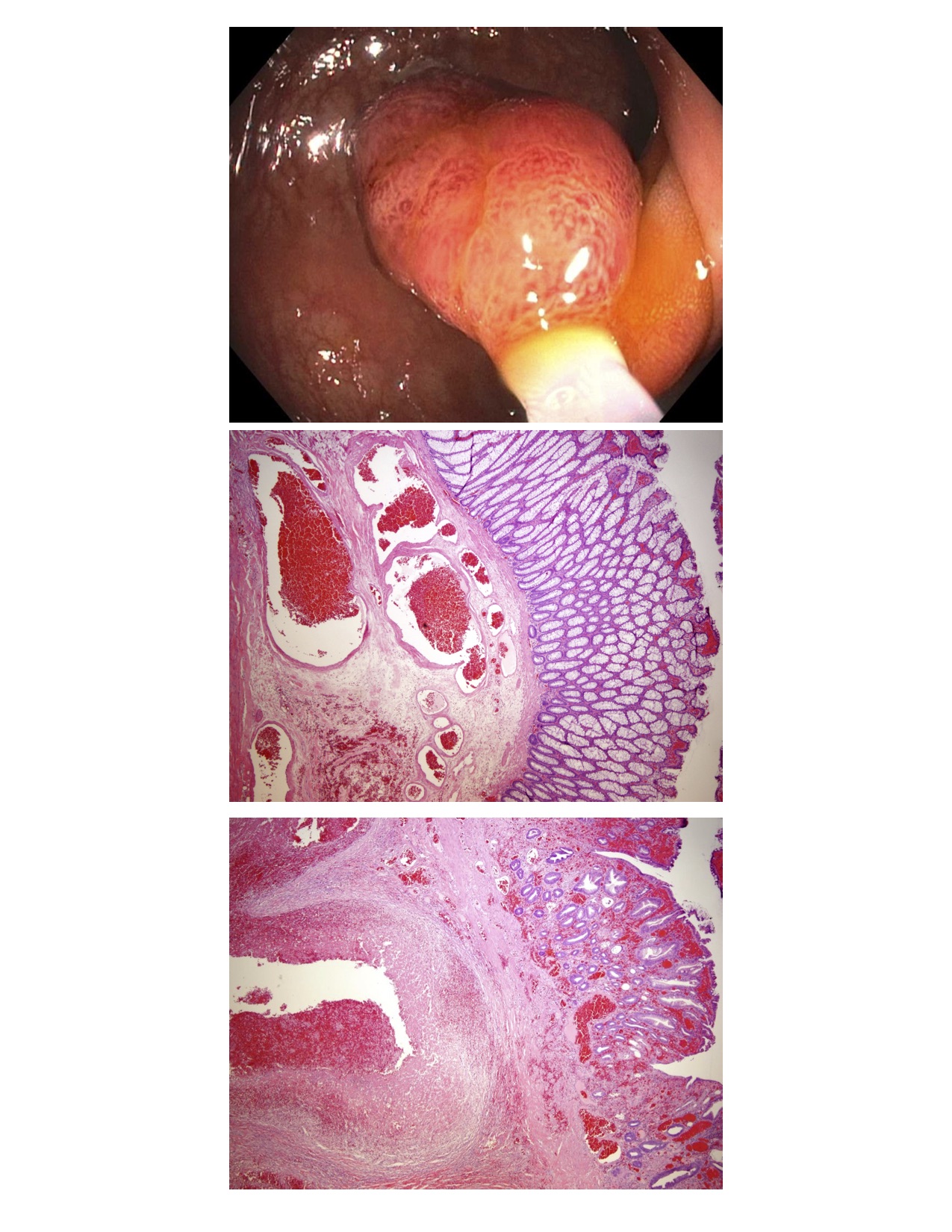