P0191 - A Rare Case of Non-Small Cell Lung Carcinoma With Metastasis to the Colon: A Case Report 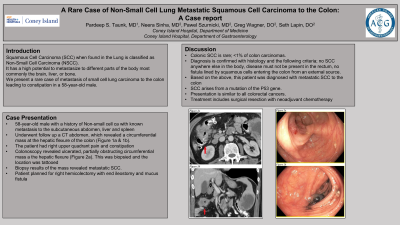 Introduction: Squamous Cell Carcinoma (SCC) when found in the Lung is classified as Non-Small Cell Lung Carcinoma (NSCLC). It has a high potential to metastasize most commonly to the brain, liver, or bone. We present a rare case of metastasis of NSCLC to the colon leading to constipation.

Case Description/Methods: This is a case of a 58-year-old male with a history of NSCLC with known metastasis to the subcutaneous abdomen, liver and spleen. The patient was on maintenance therapy with nab-paclitaxel and underwent a Computer Topography (CT) Chest and Abdomen to evaluate for disease progression. The CT revealed a circumferential mass at the hepatic flexure (Figure 1a & 1b) suspicious for a colonic neoplasm. In the Gastroenterology clinic he endorsed right upper quadrant abdominal pain and worsening constipation but denied weight loss, overt bleeding or change in stool caliber. He underwent a colonoscopy which revealed an ulcerated, partially-obstructing circumferential mass at the hepatic flexure (Figure 2a). The mass was biopsied and tattooed for localization (Figure 2b). The pathology revealed metastatic NSCLC. Surgery was consulted and the patient was scheduled for a right hemicolectomy with end ileostomy and mucus fistula.

Discussion: Primary colonic SCC is a rare entity making up less than 1% of colon carcinomas, while 95% are adenocarcinomas. NSCLC with metastasis to the colon is also considered rare with few cases reported in the literature and accounts for 0.5% of lung cancer cases. NSCLC most commonly metastasizes to the brain, liver or bone. This happens when NSCLC invades local lymph nodes and can then enter the lymphatic system eventually spreading hematologically.

SCC usually arises from a mutation of the p53 gene, by inhibiting apoptosis of abnormal cells. This then progresses into a lesion and can eventually spread to metastatic disease by seeding to other parts of the body. When it happens in the colon, the presentation is similar to all colorectal cancers; rectal bleeding, abdominal pain, change in bowel habits, change in stool caliber, and weight loss. In our patient a CT scan to monitor for progression discovered a lesion in the colon. Colonoscopy was performed to differentiate between primary and metastatic disease.

To date no guidelines on the management of cases like this exist, however surgical resection with chemotherapy is considered the best management.

This case illustrates that while rare a metastatic SCC should be in the differential when evaluating patients with colonic lesions. 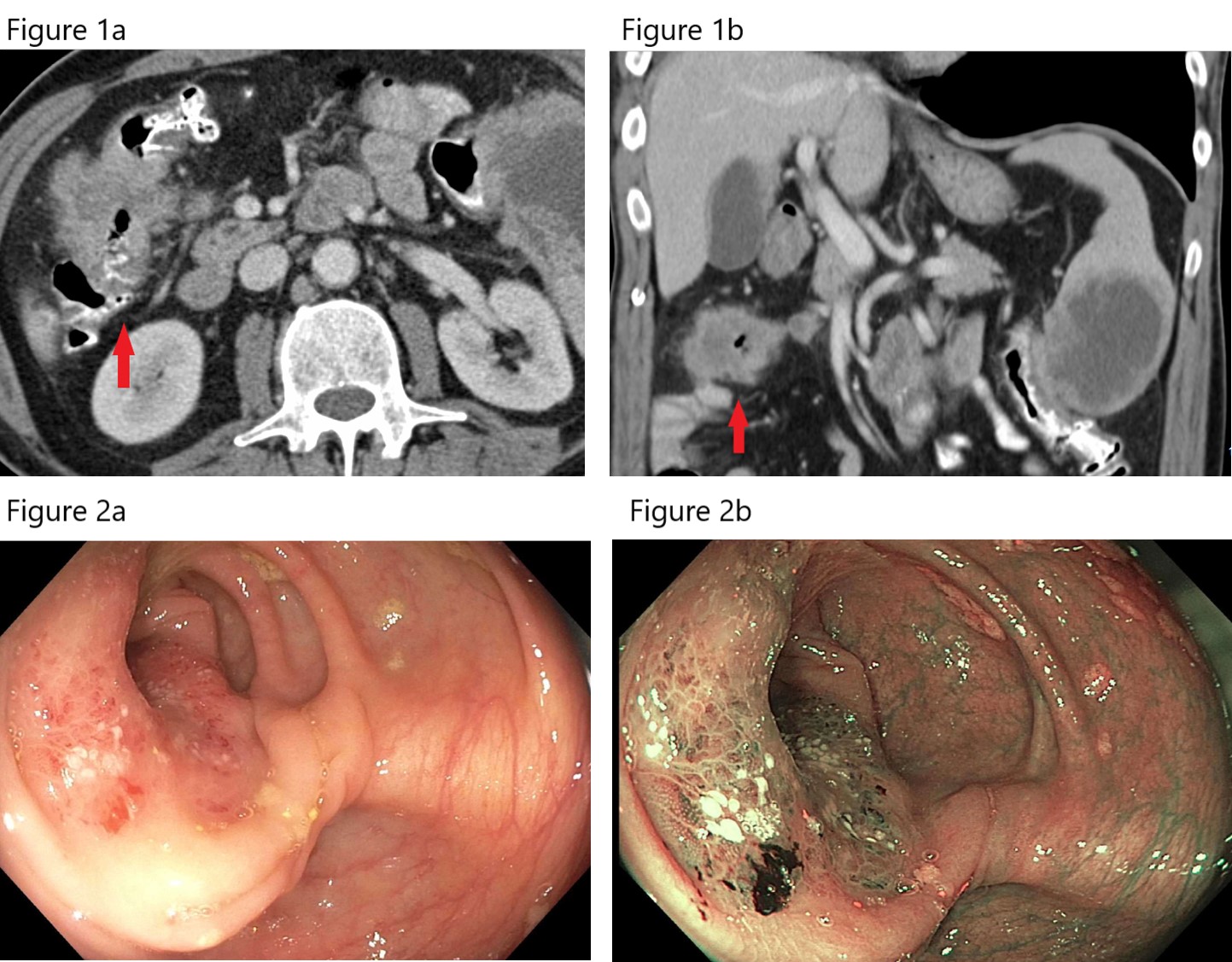 Figure: Figure 1a & b: CT abdomen revealed a circumferential mass at the hepatic flexure of the colon.
Figure 2a & b: Colonoscopy showed a mass that was biopsied and tattooed for localization.