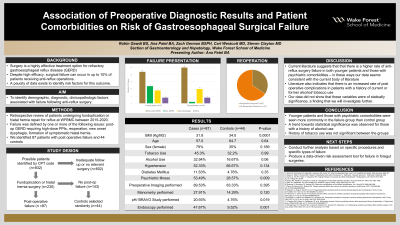 Introduction: While rates of surgical failure in fundoplication and hiatal hernia repair are low, data evaluating preoperative features of patients who do experience surgical failure has been largely contradictory and unclear.

Methods: Patients who underwent anti-reflux surgery at Wake Forest Baptist Medical Center between 2016-2019 were considered for this study. Each patient was evaluated for evidence of surgical failure, requiring either reoperation, high-dose PPI, recurrence or new onset of hiatal hernia, or evidence of new erosive esophageal disease. Patients who qualified as having failed surgeries and control patients (patients who underwent anti-reflux operation without requiring any of the above criteria were identified. Demographic data, comorbidities, clinical presentation, preoperative evaluation, and surgical data were collected for both cohorts.

Discussion: Our analysis suggests that younger patients who had psychiatric comorbidities may be more likely to experience failure. This is consistent with prior literature on the topic. Neither alcohol nor tobacco use were associated with failure, a finding that warrants further analysis. We also saw no decrease in rates of preoperative testing in the failure group when compared to controls, which is contrary to other studies on the topic.