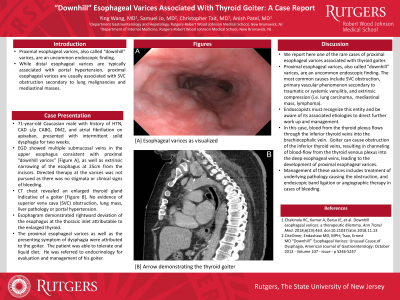 Case Description/Methods: A 71-year-old Caucasian male with history of hypertension, coronary artery disease, type 2 diabetes, and atrial fibrillation on apixaban, presented with intermittent solid dysphagia for two weeks. Upper endoscopy showed multiple submucosal veins in the upper esophagus consistent with proximal “downhill" varices [Figure A], as well as extrinsic narrowing of the esophagus at 25cm from the incisors. Directed therapy at the varices was not pursued as there was no stigmata or clinical signs of bleeding. Computerized tomography (CT) chest revealed an enlarged thyroid gland indicative of a goiter [Figure B]. There was no evidence of superior vena cava (SVC) obstruction, lung mass, liver pathology or portal hypertension on CT imaging. Esophagram demonstrated rightward deviation of the esophagus at the thoracic inlet attributable to the enlarged thyroid. The proximal esophageal varices as well as the presenting symptom of dysphagia were attributed to the goiter. The patient was able to tolerate oral liquid diet. He was referred to endocrinology for evaluation and management of his goiter.

Discussion: We report here one of the rare cases of proximal esophageal varices associated with thyroid goiter. Proximal esophageal varices, also called “downhill” varices, are an uncommon endoscopic finding. The most common causes include SVC obstruction, primary vascular phenomenon secondary to traumatic or systemic venulitis, and extrinsic compression (i.e. lung carcinoma, mediastinal mass, lymphoma). Endoscopists must recognize this entity and be aware of its associated etiologies to direct further work up and management. Usually, blood from the thyroid plexus flows through the inferior thyroid veins into the brachiocephalic vein. Goiter can cause obstruction of the inferior thyroid veins, resulting in channeling of blood-flow from the thyroid venous plexus into the deep esophageal veins, leading to the development of proximal esophageal varices. Management of these varices includes treatment of underlying pathology causing the obstruction, and endoscopic band ligation or angiographic therapy in cases of bleeding.