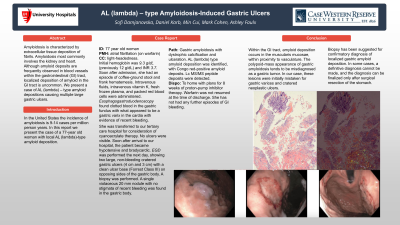 Introduction: Amyloidosis a systemic disorder characterized with extracellular deposition of fibrils in various tissues and organs. Reports of amyloidal deposits confined to the stomach are rare. In this report we present the case of a woman with local AL (lambda)-type amyloid deposition.

Case Description/Methods: 77-year old woman with atrial fibrillation on warfarin presented to the emergency room with fatigue. Hemoglobin was 9.3 g/dL and INR 3.7. After admission, she had an episode of melena and hematemesis, followed by pre-syncope. IVF, IV vitamin K, FFP, and packed RBC were administered.
EGD found clotted blood in the gastric fundus with what appeared to be a varix in the cardia with evidence of recent bleeding. Endoscopists noted that she had no history of portal hypertension, but based on the appearance of this lesion, she was transferred to our tertiary care hospital for consideration of cyanoacrylate therapy.
In the ICU of our hospital, she became hypotensive and bradycardic, atropine was administered, and hemodynamic parameters stabilized. There were no signs of overt GI bleeding this stay.
EGD discovered two large, non-bleeding cratered ulcers (4 and 3 cm) with a clean ulcer base (Forrest Class III) on opposing sides of the gastric body. Due to possible malignant etiology, biopsy was done. A single violaceous 20 mm nodule with no stigmata of recent bleeding was found in the gastric body. This was the lesion that was initially mistaken for a varix, and most likely represented a submucosal hematoma.
Biopsies showed gastric amyloidosis with dystrophic calcification and ulceration. AL (lambda) type deposition was identified, with Congo red-positive amyloid deposits. Lc MS/MS peptide deposits were detected.
She was discharged home on 8 weeks of PPI therapy. Warfarin was not resumed.

Discussion: Amyloidosis can be primary or localized. In the GI tract, amyloid deposition increases the frailty of blood vessels, hinders intrinsic peristalsis, and decreases the compliance of the gut wall. Endoscopic findings such as the polypoid-mass appearance of gastric amyloidosis tends to be misdiagnosed as gastric tumor. In our case, lesions were initially mistaken for gastric varices and cratered neoplastic ulcers. Biopsy has been suggested for confirmatory diagnosis. Arrhythmias are associated with amyloidosis as well.
Our patient presented with massive upper GI bleeding due to amyloid induced ulcers. Two unique findings suggesting amyloidosis were unexplained bradycardia and a prominent gastric submucosal hematoma. 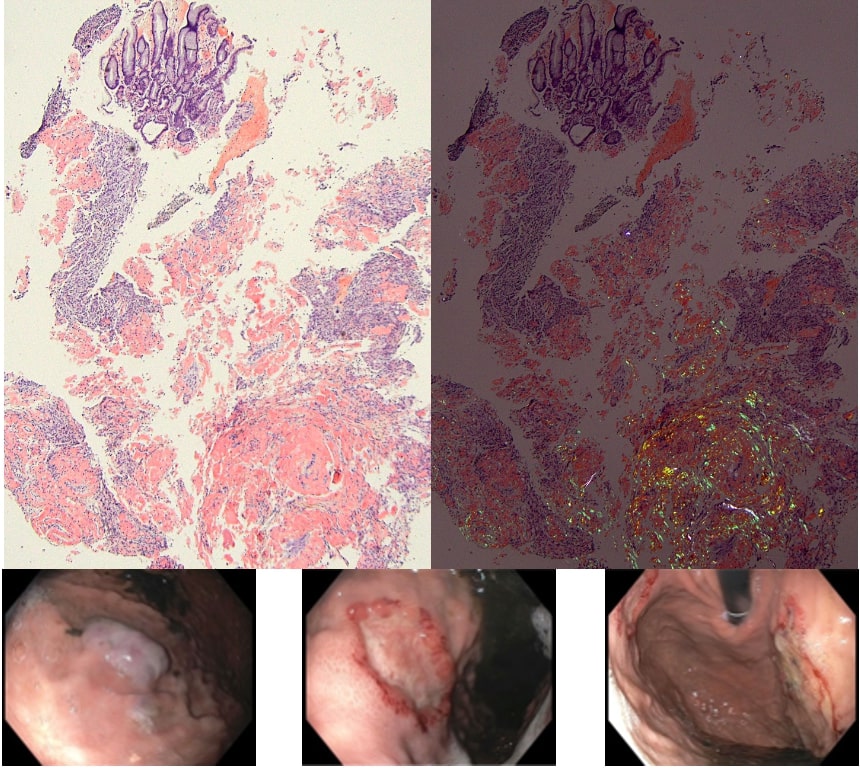