P0500 - From an Unproved Venous Thromboembolism to a Jejunal Cancer: An Unmasking Prompted by Overt Small Bowel Bleeding 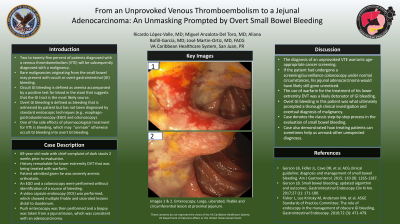 Introduction: Of all patients diagnosed with a venous thromboembolism, 2 to 25% will subsequently be diagnosed with malignancy. When considering possible malignancies, a primary small bowel neoplasm is not likely at the top of the list. Small bowel neoplasms may present with nonspecific signs or symptoms such as gastrointestinal bleeding. But even when bleeding does occur diagnosis can be challenging, as the initial work-up for with upper and lower endoscopy may not necessarily visualize the affected region. Small bowel bleeding can be categorized as occult or overt, with the former defined as a positive FIT result with no evidence of visible blood, and the latter implying a clear presentation with melena, hematochezia, or hematemesis. In this case we describe how treating an unprovoked DVT helped in the diagnosis a jejunal adenocarcinoma.

Case Description/Methods: This is the case of a 69 year old male who presented to ER with a chief complaint of dark stools 2 weeks prior. Upon further questioning, patient mentioned a history of a fall from standing secondary to associated dizziness. He also noted he had been taking warfarin chronically for a prior diagnosis of a DVT. On initial evaluation patient was found severely anemic and orthostatic, thus admitted for further management. Throughout hospitalization, upper and a lower endoscopy were performed without evidence to explain known anemia. Small bowel bleeding was then suspected, and a pill endoscopy was performed, demonstrating multiple friable and ulcerated lesions distal to the duodenum. Given these findings, a push enteroscopy was subsequently performed and a biopsy was taken from a jejunal lesion with a resultant pathology of a poorly differentiated adenocarcinoma.

Discussion: The diagnosis of an uncomplicated unprovoked VTE warrants age-appropriate cancer screening, which in this patient would have included a colonoscopy. If this patient had undergone a screening or surveillance colonoscopy under normal circumstances, this patient’s diagnosis could have gone unnoticed. We believe the use of warfarin for treating the venous thromboembolism was the likely detonator of gastrointestinal bleeding, which ultimately prompted further clinical investigation. The above case presentation not only denotes the classic step-by-step process required to identify a relatively rare small bowel malignancy, but also demonstrates how treating patients sometimes help us “unmask” other diagnoses. 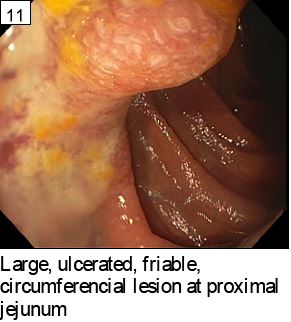